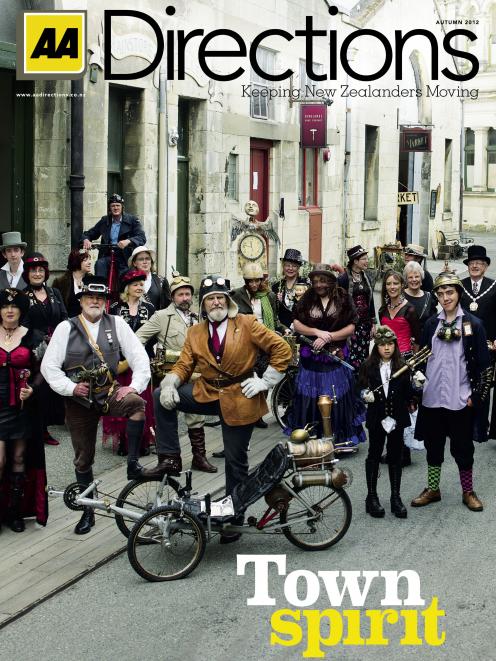 The cover of AA Directions autumn magazine, featuring Oamaru's Steampunk society, surrounded by the town's heritage buildings. Photo supplied.
Oamaru's tourism industry appears to be heading in the right direction, as the town graces the cover of a national quarterly magazine read by almost a million people.

The Automobile Association's Directions autumn edition, sent to about 550,000 AA members nationwide, and with an estimated readership of about 930,000, features the town's Steampunk movement and historic buildings.

The introduction to the feature, which also includes spreads on Akaroa, Gore and Napier, explains why the four destinations were chosen.

"Plenty of New Zealand towns are delightfully pretty, really friendly, try hard to attract visitors, or are in such beautiful locations they don't have to try. But those with genuine character are, we believe, quite rare.

"We narrowed it down to four."

Napier was chosen for its art deco buildings, Akaroa for its French influences and Gore for its country music.

Alice Galletly, of the AA magazine, said the towns all had a personality that had developed organically among locals, rather than being designed to attract tourists.

"We thought Oamaru, with its Steampunk aesthetic, was a particularly good example of this, and would make for an interesting read," she said.

"We chose to use Oamaru over the other towns for the cover because it had the best photos - over 30 people in the town dressed up for the shoot - and we thought the shot we chose would intrigue people and make them want to read the article inside."

Ms Galletly was unsure how much the five-page spread would be worth to Oamaru in terms of marketing, but said it was unlikely to be the only time the town appeared in the magazine.

"Directions is always running New Zealand travel stories, road trips, and features about special New Zealand places like this one, so it's almost certain that Oamaru will be featured in future," she said.

Waitaki district councillor Sally Hope said she had first been contacted by photographer Guy Frederick last year, possibly through the Waitaki Development Board.

"He said he thought Steampunk would make a stunning cover, and that in the early stages he thought we would win it."

The feature represented "great exposure" for the town and district, and was a fitting tribute to the team of volunteers who ensured the area punched well above its weight, she said.

The possibility for more coverage loomed large, as Annie's Tea Rooms had also been approached by another national magazine, she said.