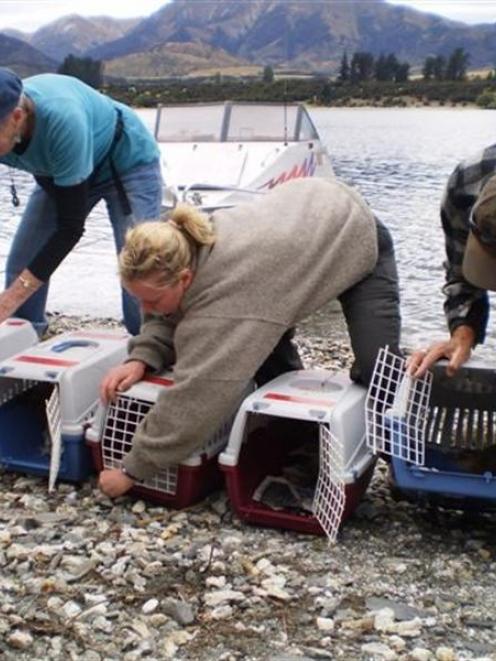 Populations of the feisty, flightless birds have already been established on islands in lakes Wanaka and Wakatipu.

Ngai Tahu spokesman Rewi Anglem said the release was the culmination of eight years of conservation work, following the establishment of a breeding programme on Te Peka Karara (Stevenson's Island) in Lake Wanaka.

Four Otago Ngai Tahu papatipu runanga have been involved in the joint iwi-Doc project to breed enough birds for a mainland release.

Mr Anglem said the challenge had been to find a suitable mainland site that was big enough yet had low predator numbers.

Pastoral lessee Tim Burdon had supported the project by allowing the release on Stevenson's Peninsula, which has a semi-predator-proof fence across its narrow neck.

The buff weka returned to the mainland yesterday are the descendants of the last 12 buff weka taken to the Chatham Islands in 1905.

Buff weka were once abundant in the drier inland regions of the eastern South Island but by the early 1900s had been driven to the brink of extinction by rabbit poisoning, introduced predators and loss of habitat.

Mr Anglem said the ultimate aim was to establish a successful population that could be transferred to many more habitats in the east coast of the South Island, providing an opportunity for Ngai Tahu to restore a taoka tuku iho (treasured asset of the past).

Funding was provided by Ngai Tahu and Doc.

The Otago University Zoology Department has recently become involved in the project.

Six of the 15 birds have transmitters attached for ongoing monitoring.

The project was at a critical stage and a key concern for the project team was that peninsula visitors did not light fires on, or take dogs to, the peninsula, Mr Anglem said.

"I know the locals will be careful and I hope we can get this information to potential visitors to ensure that the no-fires, no-dogs rules are strictly adhered to," Mr Anglem said.