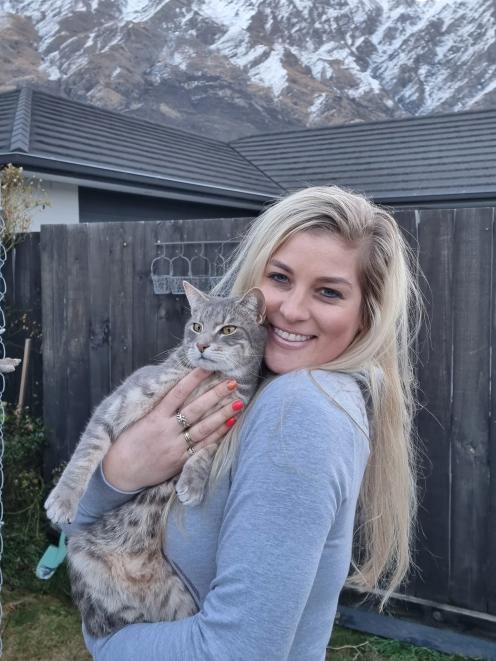 QT Community Cats trustee secretary Mel Gold with a friend. PHOTO: GUY WILLIAMS
Releasing wild cats back on to rural properties to manage pests in Queenstown has been called a ‘‘disaster’’ by Predator Free New Zealand.

QT Community Cats — which provides rescue, adoption and rehoming services for cats — is trialling a programme where wild cats are trapped, desexed and released on rural properties to manage rabbit and rodent populations.

Its trustee secretary Mel Gold said the aim was to help prevent a boom of feral cat breeding, while using cats to control other pests.

However, the programme has been met with criticism and concerns about the impact it could have on native wildlife.

She said that cats had a major impact on endangered and native species, which Otago is home to many of, including birds and lizards.

‘‘There seems to be a misunderstanding about the predator-prey relationship.

‘‘It will really impact the local biodiversity.’’

The infection can cause reproduction issues.

‘‘[The programme] is a bit of a disaster all round, to be honest.’’

Ms Morgan said having no clear guidelines for cat management, regionally of nationally, was also a part of the problem.

She wanted the group to stop the programme, and advise the owners of any rehomed cats to keep them at home.

The council had no regulatory authority over pest control methods, but there were concerns.

Grand and Otago skink populations were at critically low levels in Central Otago, mainly due to cat predation, she said.

‘‘Feral cats have a major impact on New Zealand’s native and non-native species.

Rules concerning feral cats were in place for site-led programmes on the Otago Peninsula, West Harbour-Mt Cargill and Quarantine and Goat Islands.

But there were no rules for the management of feral cats outside of those three areas, Ms Howard said.

QT Community Cats did not respond to requests to comment on the criticism.

"Cats kill birds". Yes they do, but cars kill far more, yet there is no call to get rid of cars.
NZ would do better to put some teeth in laws to control dogs; which not only kill sheep and penguins, but also people....

When I say that feral cats should be shot on sight, cat lovers ask me how I can tell the difference between feral and domestic cats. I think the answer is actually easy, domestic cats are sitting in someone's lap.
The first step in dealing with feral cats, is dealing with domestic cats. Keep them inside or on a lead. Desex them and when they die buy a canary.

I have 3 well feed cats. I let them out during the day and keep them in at night. Part of the problem is that lazy cat owners, are either too busy or just forget to feed their cats. A hungry cat will naturally want to dine out, and find something to eat.And so who's to blame for that?

This idea is as stupid as 1080!
60 plus years and billions of dollars, where are the huge bird numbers?
A total disaster.

On the surface it might seem a silly idea, however in practise it can have benefits. While working on an intensive dairy farm feral cats where a common sight. But after years of being shot at they had learnt to be scared of people. The farm imported a lot of feed which attracts rodents, that and the "dead hole", which in turn also attracted cats. When a litter of kittens was discovered it was decided that rather than killing them they would be desexed and kept as milking shed cats. The result was less rodents, less poison and because cats are territorial, less feral cats. And I can honestly say I never once saw them eating anything that was native but maybe that was because we had already destroyed the nataral biodiversity- replacing them with exotic grasses and cows.

‘‘Feral cats have a major impact on New Zealand’s native and non-native species. They feed on rabbits, birds and bird eggs, rats, hares, bats, lizards, mice, weta and other insects.’’
So true! De-sexed or not cats will kill anything. They just want the next feed. Birds, and bird eggs, bats, lizards weta (actually, wētā are related to grasshoppers, locusts, crickets and katydids which are all members of the order Orthoptera. Cats eat all varieties of native birds and insects so should be prevented from doing all the massive amount of killing they do. Cull the cats so they don't destroy the native creatures. If you do not see cats with native animals and insects in their jaws, that does not mean they are not killing heaps of them, maybe at night, even on your property.

Ummm won t the farms (esp dairy ones) the cats are released on have minimal birds, geckos or other natives. If the vast majority of animals that they kill are rats or rabbits the program is working.