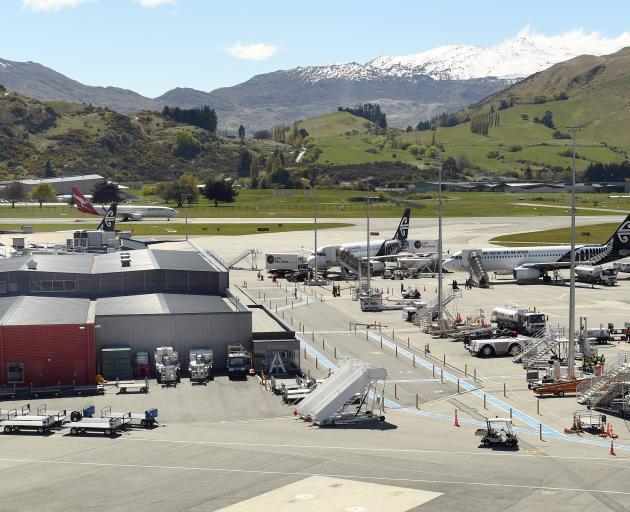 Queenstown airport ceased to operate commercial flights for the foreseeable future on April 2. Photo: ODT files
With Covid-19 bringing an indefinite end to flights in and out of Queenstown, one travel agent wants to get people a small step closer to their front doors.

Xtravel agent Tori Keating is working to organise an Air New Zealand charter flight between Queenstown and Christchurch - both for stranded tourists and local residents wanting to get back to the Queenstown Lakes district.

Once in Christchurch, foreign nationals would then be able to join either an international flight or connecting trip to Auckland.

Queenstown airport ceased to operate commercial flights for the foreseeable future on April 2 - something Miss Keating said was strange, given the amount of foreign nationals in the region.

“At the moment all of the lower South Island is cut off from the rest of the world. It’s not just Queenstown either, it’s Invercargill and Dunedin,” Ms Keating said.

“There are the odd flights going from Dunedin but very odd, once a week at the moment.”

Ms Keating said she needs at least 30 passengers each way for the flight to be viable.

Despite the national Covid-19 lockdown, anyone with an international flight to repatriate them to their homeland can fly domestically within 24 hours of the departure of that international ticket.

Travel is also considered essential for anyone wanting to return home to the Queenstown region - that being if they have isolated for 14 days upon arrival into the country.

As of Thursday, 31 people had expressed interest via Get Us Home - a Facebook page started by British national Lara Suleyman which aims to assist stranded travellers.

“What I’m hoping is I get enough people who say ‘yes I would like to get to Christchurch so I can meet my repatriation flight, or the ticket that I’m booking to get me to my homeland,'” Miss Keating said.

“Once we’ve got enough numbers we can reopen the gateway from Queenstown to the rest of the world.”

She said a big issue for many stranded tourists is that they don’t want to book an international flight because they’re not confident they’ll be able to get to Christchurch.

“Once they’ve spent the money, anything they’ve paid will be held in credit as opposed to a refund. If you’re working on limited funds you’ve got to be really careful with what decisions you’re making.”

“Air New Zealand can't put the flight on if they don’t have the demand. If there was enough demand, potentially they might be able to put on a daily flight, or a flight every two or three days.”

A Queenstown Lakes District Council spokesman confirmed today that Ritchies buses is running a shuttle service that can be booked online, with the first trip leaving Queenstown at 4.45am on Saturday.

It will take visitors to Christchurch, followed by a flight to Auckland where travellers can head overseas for repatriation, he said.

“It's imperative to note that before booking a seat on this shuttle service, anyone wishing to repatriate should get in touch with their embassy first and have all plane tickets and details lined up.

“Once sorted, they can then proceed to getting a seat on a shuttle with Ritchies.”

Tori Keating said a minimum of 20 people was needed and a maximum of 24 due to the necessity of social distancing.

• Booking a bus seat can be done here: https://ritchies-queenstown.zaui.net/booking/web/#/default/activities/ca...

If the govt. does not support newspapers/news media/TV or radio unless it is govt. owned/run or has govt. control over it, how can any of the news outlets expect special help from the private enterprise/business or indeed from poor old granny who already pays a newspaper subscription?