Rough conditions no problem for anglers

By Guy Williams
0 Comments
Anglers are a hardy bunch if the Glenorchy fishing competition is anything to go by. 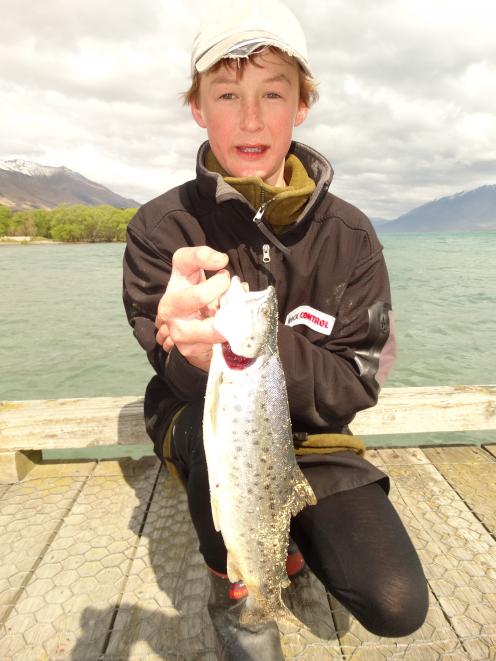 Seamus Hickey (14), of Christchurch, shows off one of the brown trout he caught off the Glenorchy wharf on Saturday.
A galeforce northwesterly did not stop them coming from far and wide on Saturday to venture out on Lake Wakatipu in some of the roughest conditions in the competition’s 39-year history.

Ranging in age from 2 to 81, more than 140 anglers came from as far away as Christchurch to try their luck.

The fish were biting despite the conditions, with more than 60 brown or rainbow trout and salmon ending up on a table at the Glenorchy Hall.

Kylie Fisken, of Gore, said she was a regular at fishing competitions, but it was her first at Glenorchy.

Although she only caught a "rather small but very clean" rainbow trout, she had enjoyed the day so much she planned to return every year.

Although she had never experienced such rough conditions in a boat before — "the waves were as high as I am" — it did not put her off.

The prize for the heaviest fish was won by Robert Moore, of Nightcaps, with a 670mm brown trout weighing 2.45kg.

Vico Kennett (5), of Wanaka, held on to a 1.6kg whopper to scoop the prize for heaviest fish caught by a child, while the Breitenberger Trophy for the most successful family went to the Hickey family, of Christchurch.