More than 100 visitors attended the Picnic at the Punt celebratory event in sunny, warm conditions this Waitangi Day to mark the anniversary of the Clutha River’s sole remaining punt.

In past times more than 25 cross-channel vessels plied the river, but punt operator Tom Jones said the unpowered Tuapeka Mouth platform had outlasted them all.

"It’s a clever design, which uses suspended cross-river cables and the flow of the river to drive the punt across from Tuapeka Mouth to Rongahere Rd. 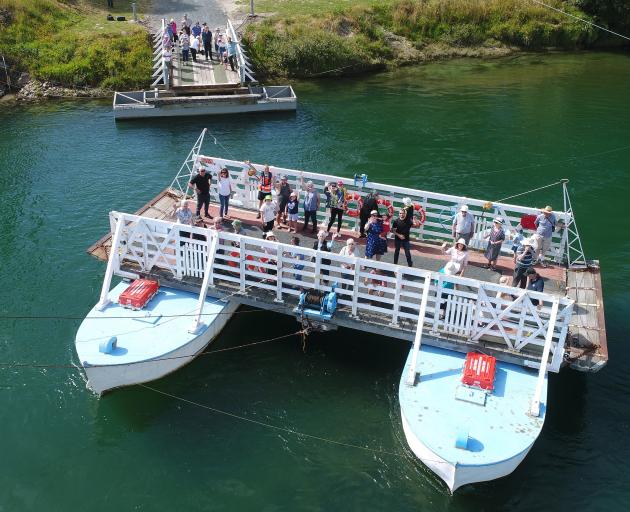 Visitors to the Picnic at the Punt Tuapeka Mouth Punt 125th jubilee yesterday celebrate with a ride across the Clutha River, under the helmsmanship of punt operator Tom Jones (rear, third from left). PHOTOS: STEPHEN JAQUIERY/OTAGO WITNESS TUAPEKA MOUTH

"If you do it by car today it takes about half an hour, so you can imagine back in the day with horse and cart, it was an essential service for farmers and tradespeople needing to get from A to B."

Family members of several former punt officials were present yesterday, many of whom had colourful anecdotes to share.

One such — Reg McCorkindale, of Dunedin — was the nephew of one-time punt operator Jock Small, who recounted an unexpectedly long crossing from his 1950s childhood.

The punt in 1913.
"The mail bus would come daily up the other side with post and supplies from Dunedin, and my uncle and I would head across to pick them up when I was staying.

"This particular day, the river was so low we got grounded out in the middle.

"Well I was only about 5, so it was all a great adventure. After it became apparent we weren’t going anywhere in a hurry, Uncle Jock fished out a loaf of bread and found some tomatoes from the day’s supplies, and we had a nice picnic mid-river.

"Once the Roxburgh Dam let out some more water a couple of hours later, on we went, no harm done."

Mr McCorkindale also recalled an incident in which a car left the punt midstream.

"I think the driver mixed up the accelerator with the brake and ended up in the water."

The occupant was retrieved shocked, but unharmed, he said.

"Luckily, the car wedged on the big rock that sits just out there, otherwise it could have been a different story."

Jubilee spokesman Colin Child said the event had been postponed from last Waitangi weekend, following one of the numerous floods to have beset the river over the decades.

"The weather’s absolutely perfect today, and a big crowd has joined us to celebrate.

"The punt is a very special piece of local history, so we’re pleased we’ve finally been able to mark its anniversary."