Balclutha garage fire 'a kick in the guts' 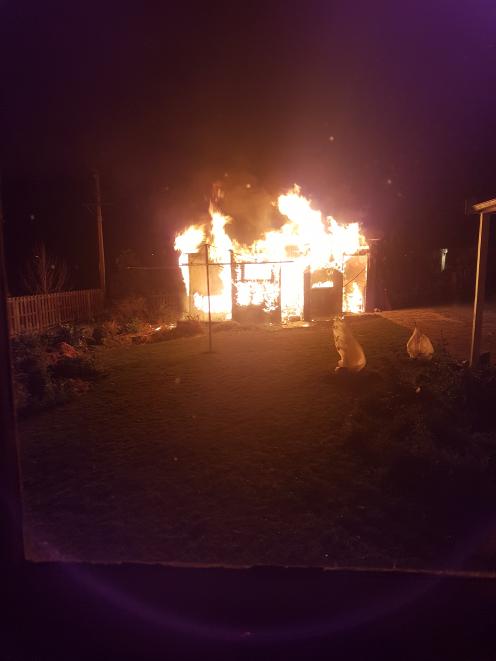 A garage at 18 Lewin St, Balclutha, shortly after emergency services were called about 12.30am this morning. Photo: Supplied
Police are investigating after a fire destroyed a garage and two vehicles in Balclutha overnight.

Emergency services were called to the incident about 12.30am last night after a neighbour spotted flames in the detached garage at 18 Lewin St.

Residents Glenn Burns and Giselle Cooper were alerted to the blaze shortly afterwards, and remained in their home to the rear of the property.

Mr Burns said although the loss of property was "a kick in the guts", nobody had been harmed, and none of their six children were at home during the incident.

"It could have been a lot worse, so although it was pretty scary and we're gutted to lose the cars and other property, we're thankful the house and our families were spared."

Mr Burns said he believed the fire was "suspicious".

"There's no power to the garage, and nothing there that would spontaneously combust, so we're wondering exactly how it started."

Police at the scene declined to comment until further investigations had been carried out.