Call for community to get behind pool 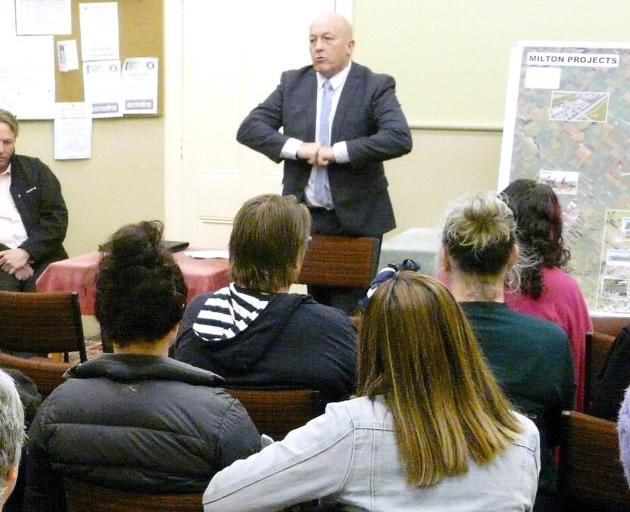 The Clutha District Council met townspeople on Monday night to quell concerns over relocating the pool to a proposed $5.8million service centre complex in the town's centre.

In May, the council narrowly voted in favour of this option, under which it will co-fund the pool equally with the community.

Five councillors voted to retain the pool at its current site, adjoining two of the town's schools.

In June, Tokomairiro High School sports teacher Tom Sinclair launched an online petition against the proposed relocation, which garnered more than 400 signatures, or about 20% of Milton's population.

During earlier public consultation, 66% of respondents had supported the combined relocation option, however.

''We received more than 1500 individual pieces of feedback during exhaustive consultation, of which 66% were in favour of the new complex. I've no intention of now insulting those people by wobbling in favour of an unmandated option.''

He acknowledged concerns, raised by some present, that the former pool facilities should be repurposed where possible.

''I'm aware of past fundraising efforts, and their importance to residents. The plan is to use elements such as the changing rooms to provide improved campground facilities.''

Milton's ''ageing demographic'' would be well served by a more central pool, he believed.

''I get that the schools had a good argument. The main street had a better argument. If you're a pensioner with a dicky hip, a central location is key. If school kids have to walk five minutes instead of two, that's not a pressing issue, to my mind.''

Of the 17 who attended, only a minority spoke against the proposal.

Among those supporting the project was resident Kim Schiller, who said the district should be ''excited, not negative'' about the opportunity.

''Let's hold hands with the council to get the best outcome for our community.''

Concluding the meeting, Mr Cadogan appealed for a ''coalition of the willing'' to establish a project working group.

Yesterday, he confirmed 14 people had volunteered.

''We're thrilled. This project is pivotal for the future of Milton and surrounds.''