'Cribbies' get new lease on life in paradise 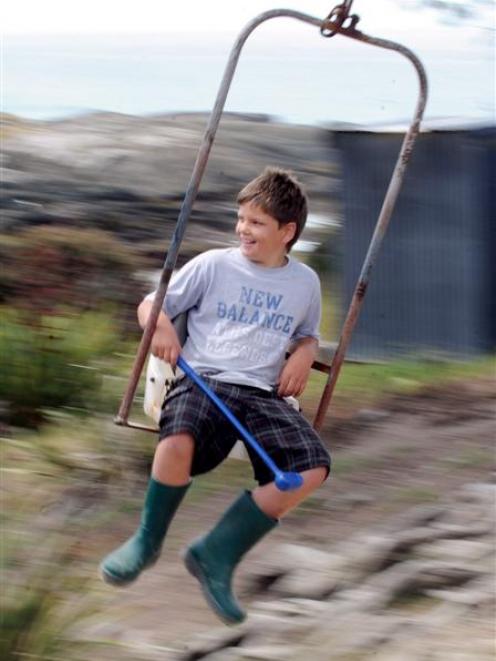 Michael Kuiti (10), of Balclutha, is a Bull Creek regular.
The future of the small South Otago seaside settlement of Bull Creek will soon be a lot more secure.

For more than 100 years, the continued existence of the cluster of cribs has relied entirely on the agreement of the owner of the farmland on which they stood.

But, later this year, the 42 cribs should each have their own 33-year lease agreement with landowner Gwen Lane.

Known by even her best friend as "Mrs Lane", the highly respected matriarch of Bull Creek wants to ensure the "cribbies" are looked after in the future.

"The way they are now, I could just tell them to take their crib and go, but I wanted to give them more security.

"It was my idea, because I'm getting on in years and I wanted to have it sorted out."

Mrs Lane and her late husband, Edison Powell Lane, bought the 148ha sheep farm - including the 4ha on which the cribs stand - in 1956.

The annual rental paid by each crib then was 5£.

"She has really gone out of her way to set this up for us."

Mr Taal estimated the process of putting leases in place was three-quarters complete and when it came to paying the legal bills, there was no issue.

"What cost is a small place in paradise?"

The cribs are mostly tidy and well-painted with many touches of southern, seaside kiwiana. Some have spectacular views of the rocky coastline and small, sandy beaches.

Mr Taal believed the prospect of obtaining 33-year leases was already encouraging crib owners to take even more care of their properties.

"When you are on a year-to-year basis, on a day-to-day basis, you think twice about doing renovations and twice about the maintenance of your place. You tend to spend the bare minimum."

He did not expect that the leases would lead to Bull Creek cribs being replaced by more substantial buildings.

"We'd like nothing more than to just stick a glass dome over it and keep it the way it is forever, really. It's an icon of New Zealand."

Asked how she would feel once the leases had been signed, Mrs Lane said, with a laugh: "I'll be able to rest in peace then."

•Bull Creek, 17km from Milton, is also referred to by its Maori name, Moanariri.

•There are two theories on how it came to be called Bull Creek. One is that the name is derived from the English fictional character John Bull . . . the other has a more local flavour.

•The Otago Witness newspaper of December 14, 1904, recounted the tale of how a wild bull, known as "the Terror", plagued the domestic cattle of the area before meeting a grisly end at Bull Creek.