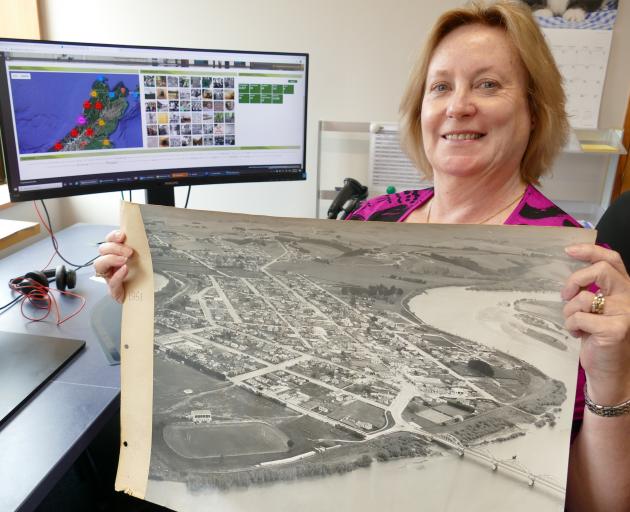 Clutha District Council library and service centre manager Debbie Duncan says heritage resources such as this 1951 aerial photograph of Balclutha will become easier to access online, thanks to the creation of a new, government-funded community heritage co-ordinator role. PHOTO: RICHARD DAVISON
Capturing today’s stories as tomorrow’s heritage will be central to a new library role about to be created in Clutha.

Two roles were already filled and under way, and two remained to be filled, she said.

Applications for one of those roles, a new "community heritage co-ordinator", closed on Tuesday, and Ms Duncan hoped a successful applicant would begin the new role by the end of April.

She said the co-ordinator would help the community store and curate local heritage digitally, in a district-wide "heritage repository".

"As someone new to the district myself, what has immediately struck me is just how important heritage is to the Clutha community," she said.

"That’s reflected in the many active museums and heritage societies in even the smallest and most remote settlements.

"The new co-ordinator will be there as a single, central point of contact for all those strands, and enable communities to store and curate heritage materials in a permanent, accessible digital format."

Capturing heritage elements such as oral histories, documents and photos before memories and materials were lost was critical, Ms Duncan said.

"Heritage is where we have come from, it explains where we are today and where we want to go tomorrow."

The funding would support wages for the new role and digital equipment necessary to record and archive materials, she said.

"Videoing oral histories can add to their compelling nature, and enrich the detail and context for future viewers."

She said the programme would be inspired and driven from the "ground up", rather than the top down.

"This is very much community shaped and driven.

"We want to make resources available to local groups and enable them to record and link to heritage in ways that are enduring and accessible for posterity."

Other roles created under the funding included two digital programmes co-ordinators, who would run outreach programmes, and a "digital applications and content" role, targeted at modernising Clutha libraries’ digital facilities and accessibility.

Ms Duncan praised the Libraries Partnership for funding the upsurge in activity.

"It’s all about bringing our libraries closer to the community."