Town's youth campaign against meth use

South Otago took a step forward in the fight against drugs on Saturday.

At noon, about 120 people gathered outside the Balclutha War Memorial Hall to march together to the town's Cross Recreation Centre, in aid of new initiative MAC (Methamphetamine Awareness Campaign) Clutha.

Conceived and organised by the Clutha District Youth Council, MAC Clutha aimed to ``educate and reach out to'' those affected by, or at risk from, growing methamphetamine (meth) use in the South Otago community, youth council chairwoman Ella-Rose Lawrence said.

"Everyone needs to know meth is a problem locally, and we hope through today's march and presentation by Amped4Life, we can start the conversation, and work towards ridding our communities of drugs.'' 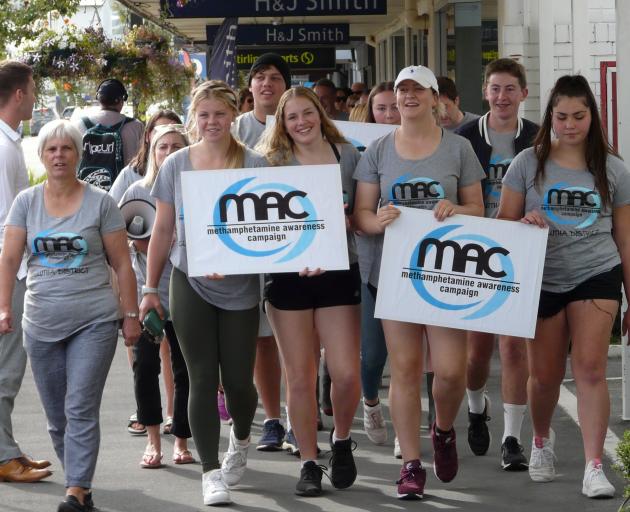 Following his own journey through addiction, Mr Buckley now travels the country telling his story, and illustrating the consequences of using meth and other drugs.

He told how his own transformation began after he lost several friends through drug use, then almost lost his own life by overdosing on several occasions.

"I started out smoking weed [marijuana] and from there moved into other drugs. When I reached the point that my heart had stopped three times in a month, I confronted my demons and made a decision to start again.

"Part of that long rehabilitation has been to raise awareness of the insidious nature of addiction to drugs and alcohol, and the carnage they wreak in society. With the young people leading this campaign today, this is a prime example of how we can work positively to stop people at the top of the cliff, rather than scraping them up at the bottom.''

"He's a great character, and has been through all the ups and downs himself, so his point of view has real impact.''

The youth council hoped to maintain the momentum generated by the event.

Great to see a meaningful march