A tourist bus crash in a remote area of Southland, near Te Anau, which injured 15 is a telling example of why a rescue helicopter must continue to be based in the town, says the owner of the farm where the bus ended up. 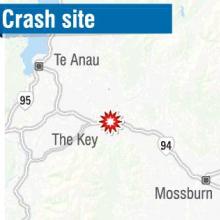 The bus, carrying 17 people, crashed on the stretch of State Highway 94, between Mossburn and Te Anau, described by a local as "lethal''.

Burwood Station sheep farmer Hamish McClean said the bus, understood to be carrying Korean tourists to Milford Sound, did a 180-degree turn before rolling on to its side and sliding into his fence shortly after dawn on a frosty morning yesterday.

It was the third such morning in a row, and black ice warnings were in place.

The grass beside the road was white with frost. The site, at the bottom of Gorge Hill near The Key, was known by locals to be ice-prone in shaded areas.

"It's people just not driving to the conditions. I could have put my hat on it that it was going to happen this morning,'' Mr McClean said.

Four patients were transported by helicopter to Dunedin Hospital, two with serious and two with moderate injuries.

Another two patients were transported from Fiordland Medical Centre in Te Anau, by helicopter, to Southland Hospital with moderate injuries.

Accident scene ... A Lakes District Air Rescue Trust helicopter at the scene of the bus crash near Te Anau in which 15 people were injured yesterday morning. PHOTO: SUPPLIED

The incident showed why rescue helicopters needed to continue operating from Te Anau, after the National Ambulance Sector Office put air rescue services out to tender following a review, he said.

"This is definitely why we need the rescue helicopters based here.''

Southern Lakes Helicopters director, chief executive and chief pilot Sir Richard Hayes was flying a load of crayfish when he got the call to go to the crash scene about 8.10am.

He dropped off the load and his was the first rescue helicopter at the site.

Chief pilot Graeme Gale said it had been a busy morning for the trust.

Shortly after the crash, another rescue helicopter was called to transport a premature baby to the neonatal intensive care unit at Dunedin Hospital.

Before noon, another helicopter was deployed to reports of a crash near Tekapo, but was later stood down.

"It really tests our systems and shows how robust our current model is. It was an extremely good response,'' Mr Gale said.

The crash was being investigated.

Te Anau Chief Fire Officer Graeme Moffat said his volunteer crew had trained for large bus crashes, but this was the first time he had encountered such a high number of casualties in one incident.

Fire crews assisted police and St John but his team was not required to do any "extrication work,'' he said.

"They were just grunts today.''

One killed in Nth Island crash