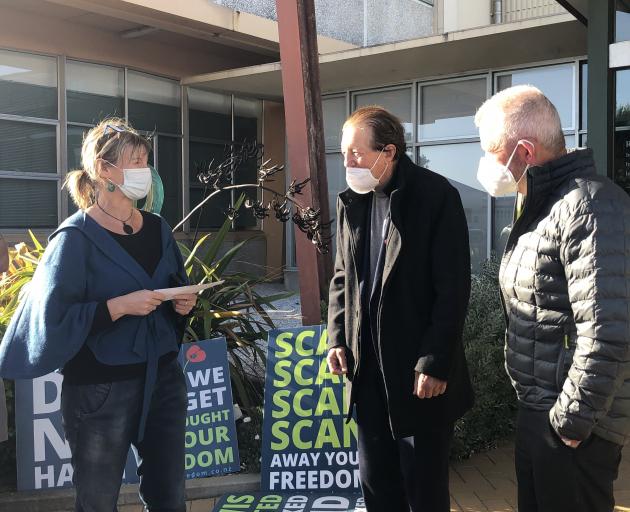 In December, the council introduced a policy requiring the public entering its facilities to be vaccinated for Covid-19.

On Tuesday, the council decided to keep the mandate requirement until at least April 12, when it will consider a staff report about the matter.

Invercargill women Sonya Short and Leisa Cournane said the group was there to advocate for many children in the community as they believed the mandate was discriminatory.

"It is discriminating [against] everyone but particularly children from 12 to 18 who can’t enter those facilities," Mrs Short said.

Mrs Cournane said keeping the mandate was nonsense as children were all together in the school grounds yet could not attend extra-curricular activities in council facilities.

Children were barred as a result of the council’s choice — not because of any government mandate, she said.

Another protester, Maria Cournane (no relation), had moved from Western Australia to Invercargill with her 14-year-old son, who was a top swimmer, but he could not go to the pool.

They empathised with the protesters, but the council made the decision in order to "protect" the majority of ratepayers within the community, they said.

Sir Tim said one of his sons was also part of "their movement" and he could understand their concerns.

Cr Clark told the crowd he did not agree or could not understand many points of the Government’s strategy, but the protesters could not deny the fact New Zealand was one of the safest places to be during the pandemic.

After the meeting, he said he understood their concerns but the council would review the matter in April as planned.

In the meantime, a group of protesters has been camping at the Gala St reserve since last week.

A council spokeswoman said the council was working closely with police and was monitoring the situation.