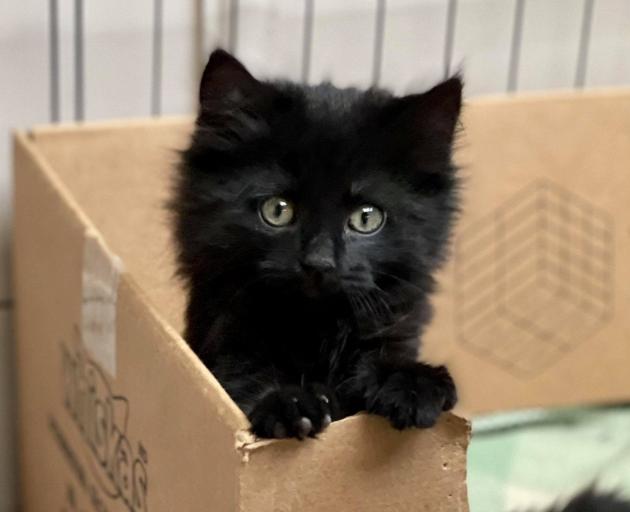 Invercargill foster kitten Bella is just one of the many felines who have been taken in by charity Furever Homes. PHOTO: SUPPLIED
Cat and kitten fosterers are unable to provide animals with the care they need due to a shortage of litter trays.

It is an ongoing issue for volunteers of Southland charity Furever Homes, who dedicate an enormous amount of their time to giving love to dumped or abandoned animals in need of rehoming.

Volunteer Emma Lindsay said kitten season, which ran from spring to early autumn, created added pressure for the organisation, which only had about 20 fosterers.

"It’s supposed to be one cat to one litter tray, but we have multiple cats going toilet in the one tray."

Not only was it unfair on the animals, it also created a whole lot of extra cleaning for fosterers, many of whom worked full-time jobs and were balancing their responsibilities, Mrs Lindsay said.

Although the not-for-profit was "right on the tail end" of kitten season, cats could have up to three litters each time, each litter consisting of about four kittens on average.

"The problem multiplies with great ease."

While it was not necessarily always the owner’s fault — for example, there were cases where the owner had died — Furever Homes was often inundated with animals without homes.

The charity did most of its work out of the pockets of volunteers, and resources were scarce.

Kitten food and litter donations were appreciated all year round.

Mrs Lindsay said there was a simple solution to the recurring problem — desex cats.

People needed to realise the responsibility which came with owning a cat, and that desexing, so the cats could not breed, was a very important part of being a good owner.

While volunteers did their best to fundraise for resources, it was not easy.

"The more we need to help animals, the less time we have to fundraise.

"You don’t have to be a cat or kitten owner to do it, and it’s a great way for people to get involved if they can’t foster."

Drop-off points for litter trays had been set up at Invercargill’s PetSmart, Animates and Countdown in Waikiwi.