A number of small business owners have installed video cameras, alarm systems, fog machines and even closing businesses earlier in response to the increase of incidents in the city.

From May to November, police reported six dairies and one petrol station had been targeted – with some businesses hit twice.

Newfield Dairy on Centre St was broken into twice in the same week last month.

At the time, part-owner Christine Radka said a group of offenders returned for the second time in less than 48 hours after an unsuccessful attempt to break into the cigarette cabinet.

Police had since arrested and charged those involved, she said.

"We’ve been more relaxed since they [police] caught them but it’s still worrying knowing they’re still going on.” 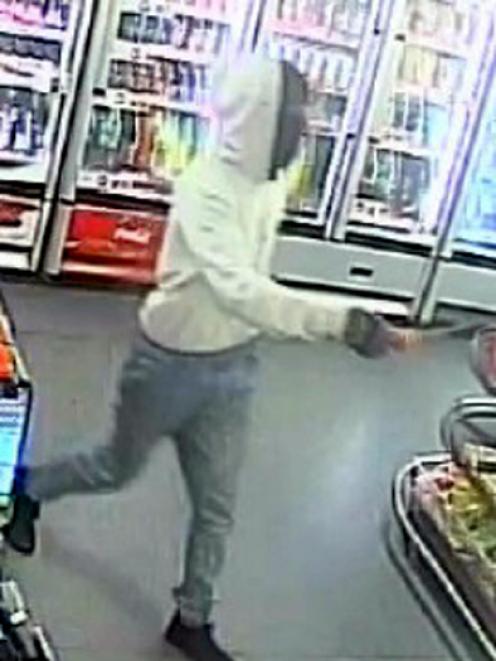 Police have released CCTV footage of a man in a bid to get the public to identify the person allegedly responsible for the aggravated robbery of the staff at the Collingwood Foodcentre in Invercargill on Saturday.Photo: Supplied
Security measures at the store had been dramatically increased since the incidents, she said yesterday.

"Even if they don’t get away with much there’s still the uneasiness and disruption on the staff.”

Mrs Radka said it was a shame break-ins now seemed to be a part of being an Invercargill dairy owner.

Grasmere Grocery employee Vincent Xie said he was in the back of his shop in May, when two masked offenders entered wielding golf clubs.

"I heard a smash and when I came out I saw two young guys with their faces covered – I could just see their eyes.”

About $2,000 worth of cigarettes were stolen from the store where he was left in a "terrified” state, he said.

Despite the fact the owner had installed four new video cameras since, he was still very scared, he said.

"I close the store earlier at night now.”

He blamed the increasing cost of cigarettes for the attack on his workplace.

"People who are poor are taking them, and then they sell them to make money.”

A 19 and 17-year-old male were later arrested and charged by police for the Grasmere incident.

Invercargill Police were sent questions earlier this week seeking further information in relation to these incidents. They had not responded to these questions at the time of the Southland Express going to print.