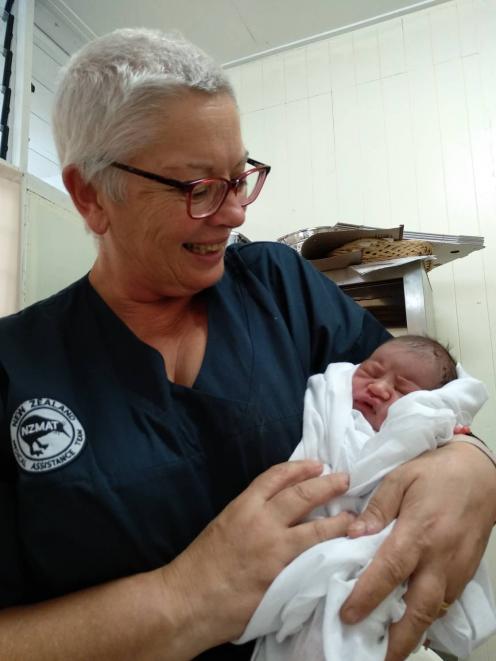 Invercargill nurse Anne Dymond holds baby Annegelo — a baby she delivered while at Leulemoega Hospital in Samoa while helping with the measles epidemic. Photo: Supplied
Southland nurse and midwife Anne Dymond looks proudly at her phone of the photo of a Samoan mother holding her 1-year-old child.

This same mother had brought her youngest, a very sick 3-month-old baby, to the Leulemoega Hospital in Samoa two weeks ago to seek assistance.

The baby had measles.

Despite wanting to get help, the mother soon wanted to take her baby home.

‘‘I noticed she [the mother] kept touching her breast. She kept saying ‘family’ and we couldn’t understand what she meant.’’

The mother was chronically engorged with milk — it transpired she wanted to go home because she needed to breastfeed her 1-year-old child at home.

Mrs Dymond convinced the mother to hand-express her milk.

‘‘We got 70ml of milk into a urine pot, as it was the only thing available, which we stored in the fridge and because she knew her [1-year-old] baby would be fed and she felt much more comfortable, the family decided to stay.’’

Had the family returned home, Mrs Dymond was sure the outcome for the 3-month-old would most probably have been fatal.

Mrs Dymond was a member of the New Zealand Medical Assistance Team (NZMAT) Alpha that has just returned from a two-week deployment in Samoa.

NZMAT is a volunteer disaster medical assistance team, organised by the Ministry of Health, made up of doctors, nurses, paramedics, allied health, and non-medical members such as logistics specialists.

The team is deployed when countries seek assistance from New Zealand to assist and support in times of disasters.

Unfortunately not all the cases in her last deployment to Samoa were successful. Attempts to resuscitate two other children failed.

‘‘Sometimes the babies would have secondary infections. They would sometimes get pneumonia.

‘‘Then they go into respiratory arrest [and] we would have to try and resuscitate them.

‘‘To hear the guttural cries of mothers who have lost their children haunts you.’’

The Samoan Government has now made vaccination compulsory for all people, but depending on the vaccinations available on any given day, sometimes people have to wait for them.

Despite the challenges, Mrs Dymond said there had been many successes.

In one day, she and the team she worked with vaccinated 890 people — the minimum in one day was 350 vaccinations.

She delivered three babies while there; one was named Annegelo, another Anne.

Mrs Dymond is only home for a week.

She will join the NZMAT Charlie team, which will relieve the team now deployed to Samoa, after she has attended her graduation for her masters in health (midwifery) with distinction next week at Victoria University.

For the mother of seven children, who became a nurse when she was 50 and celebrated her 61st birthday in Samoa last week, her ambition is to continue to assist the people of Samoa.

‘‘We know we’re making a difference. That’s what we wanted to do was make a difference and to support the [Samoan] staff who have worked so incredibly hard.’’