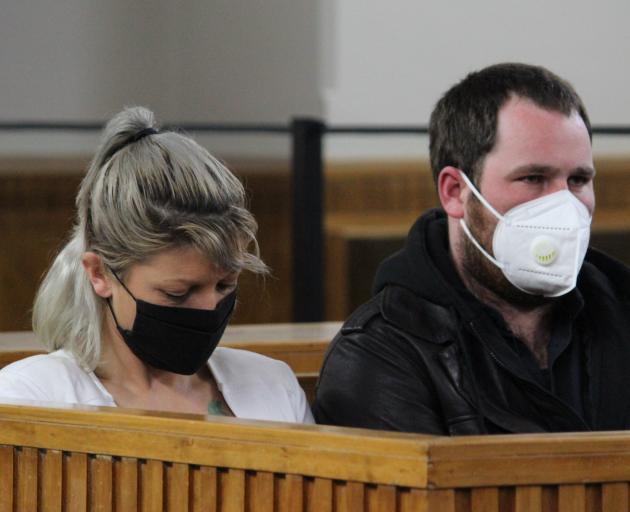 Murder-accused Sandy Graham, and the man accused of being an accessory after the fact, George Hyde, sit in the dock in the High Court at Invercargill. PHOTO: KAREN PASCO
A woman accused of murder says she does not know whether she pulled the trigger of the gun which fired the bullet that killed Dale Watene.

The jury trial before Justice Nation in the High Court at Invercargill began on June 13.

Murder-accused Graham took the stand as a witness yesterday.

During examination by Graham’s defence lawyer, Philip Shamy, Graham said the couple were good a lot of the time but when they were drinking things could get abusive.

Two police safety orders had been issued after police were called to her property, one in March, 2020, and the other just weeks before Mr Watene’s death.

She said on the night Mr Watene died they were getting along fine.

It was when they woke up after a short sleep on the evening of April 16 and Mr Watene discovered a “dick pic” of a man she had sex with a few weeks previously on her phone that an argument started, she said.

She told him to calm down, the argument got heated, then he punched her in the chest.

The argument continued, then she went outside, hoping he would follow her, she said.

She then got into Mr Watene’s truck, which was parked in the Clitheroe St garage at the property, and backed it out of the garage. Mr Watene was reaching through the window, she said.

“What was he doing?” Mr Shamy asked.

“Trying to get the key to stop it,” she said.

She drove the truck to Holt Park, hoping Mr Watene would follow her.

On her return to the house, about a block away, she could hear the children screaming and crying and Mr Watene yelling, she said.

It was then she entered the house and got the gun.

Believing the gun was not loaded, she used it to push him out of her bedroom, pointing it at his stomach.

They wrestled with the gun in the hallway and Mr Watene put it in his mouth, she said.

“As I closed the door [to the bedroom] the gun went off.”

After putting the gun back behind the mirror in the bedroom, she checked Mr Watene’s pulse.

She could not remember what she told Hyde when she called him asking him to come to the house, but admitted she might have said Mr Watene had hurt himself when Hyde arrived at her house.

Before Hyde arrived, one of her children needed to go to the toilet, so she took the child, stepping over Mr Watene’s body on the way, she said.

“I think when I took [the child] back into the room, I think I told the kids I punched him and he was just playing dead.”

Hyde and Graham then took Mr Watene’s body to the lounge, wrapped it in a tarpaulin and carried Mr Watene to Mr Watene’s car parked in the Sorn St garage, placing him in the back seat in a sitting position.

She said she scrubbed Mr Watene’s face the following day, before travelling with Hyde and her children to Longwood Forest, where the adults dug the grave as the children played nearby.

There were a number of concerns she had after Mr Watene was killed that led her to do what she did, she said.

“That my kids would get taken off me.

“Not knowing whether I pulled the trigger or not.”

Mr Shamy said in reply “you’re saying you don’t know if you pulled the trigger or not”.

She could give no explanation as to why she burned Mr Watene’s boots, wallet and cellphone after he was killed or why they decided to bury him in Longwood Forest.