By Laura Smith
1 Comment
With the hands of time ticking, the question as to what kind of transition is in store for Southland once the Tiwai Point Aluminium Smelter closes, poses an opportunity for sustainability and regeneration.

A Murihiku Regeneration science and innovation wananga was held yesterday and today to explore what was to come.

The group was formed in August 2020 between runanga and hapu members and a collaboration between Ngai Tahu ki Murihiku and Fortescue Future Industries was to work together to assess and possibly develop a large-scale, renewable, green hydrogen production project in the region.

This was one of seven areas of focus.

Programme director Terry Nicholas said the scale and scope of opportunity was for 5000 jobs to be created within five to seven years. 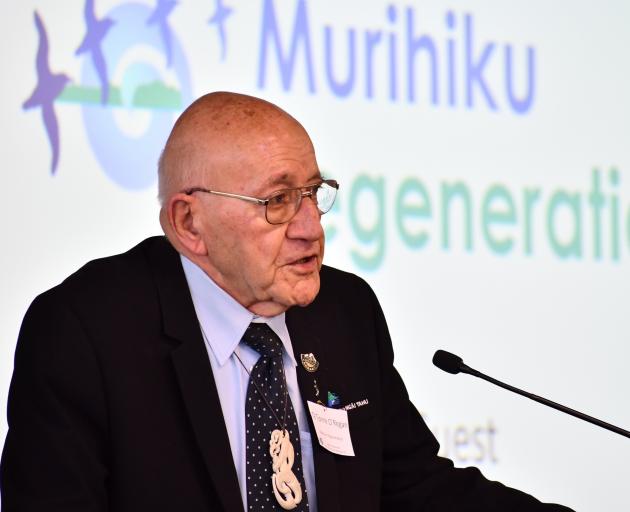 Upoko o Awarua Sir Tipene O’Regan speaks at the Murihiku Regeneration Science and Innovation Wananga in Invercargill yesterday. PHOTO: LAURA SMITH
In his opening speech, Sir Tipene did not mince his words as he stressed the importance of immediate change.

There needed to be transformation, including decarbonisation, to solve the challenge of the environmental degradation and destruction that had taken place as a consequence of what "we’ve done actively in collusion with Rio Tinto at Tiwai ... but it was in collusion because we all wanted the foreign exchange that came from that activity.”

The way forward would need to include involvement of Ngai Tahu, he said.

"We have a future in this island and we want to have a voice."

Energy and Resources, and Research, Science and Innovation Minister Dr Megan Woods attended and reiterated the Government’s pledge to a "just transition" after the planned closure of the smelter in 2024.

Dr Woods acknowledged Ngai Tahu’s dedication to working on the transition and its vision for a thriving, green, energy hub.

"This event comes at just the right time. I know there is lingering uncertainty in the region about the future of the Tiwai Point site, its remediation and its future uses."

She clarified the Government did not plan on importing hydrogen.

The Government was working on a plan for a domestic hydrogen industry.

She called on Southlanders to come together to work out what investments and policy changes were needed from central government, local government, iwi and private investors for the desired transition.

I wrote to Woods asking them to consider keeping the smelter open so that it could provide materials for the building of sustainable housing (siding, roofing, joinery - you know stuff that makes up a house) as she is also Minister of housing in a crisis. I got a reply "We are discussing our options with interested parties blah blah blah". This green hydrogen is being bankrolled by a billionaire and I would guess that is all these parties need to hear. Most would not even know how hydrogen can be used or transported - but they sure know about money and shiny easy "solutions". Constructing the facility alone let alone decommissioning Tiwai will take decades of green economy to break even on. Another rich person sees our electrical generators as their own private money tree and these guys are sure to give it to them while we all pay more and have less.