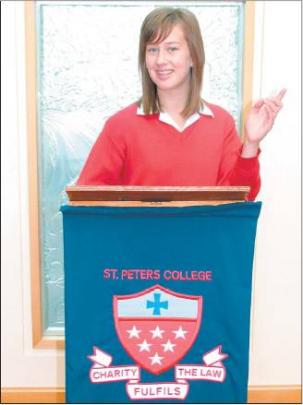 Perfect elocution: Alice Wilkins (14) practising one of her many talents — public speaking. 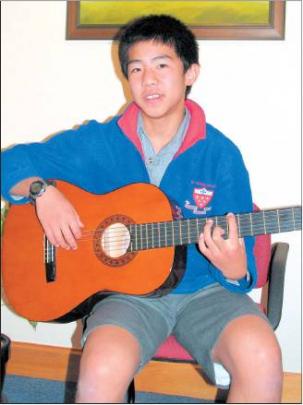 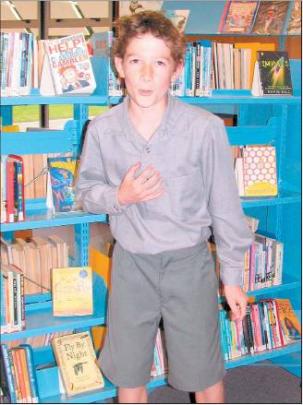 Outstanding success in the Trinity Guildhall examinations is being celebrated this week by three pupils of St Peter's College in Gore.

Alice Wilkins (14), Morgan Pearce (12), and Kavan Chay (13) have just received notification of their respective performances in speech and drama (Alice and Morgan), and music (Kavan).

Vice-principal Lindy Cavanagh-Monaghan said for Alice, a year nine pupil, to be doing so well especially at grade six was just ‘‘incredible''.

Alice said the examination consisted of oral pieces she had prepared in advance, as well as a sight reading she had 30 seconds to prepare for.

In addition, she was examined on speech theory and had to discuss this with the examiner.

She loves everything to do with production, dance and speech.

‘‘I love acting and I sing a bit, but dancing is my true love.

‘‘I am definitely looking forward to this year's school production and also performing for St Peter's at this year's Bishop's Shield, to be held in Oamaru at St Kevin's,'' she said.

She said learning to speak well in public was a ‘‘great plus'' for any future career.

‘‘At the moment I'm leaning towards law.''

Mrs Cavanagh-Monaghan said Alice was a ‘‘superb all-round young lady, gifted and talented in so many ways''.

‘‘She's the total package - we are extremely proud of her at St Peter's.''

Kavan Chay said he had been learning acoustic guitar for three years now, taught by Travis Hill from Ashby School of Music and Rockschool.

His performance in the grade one Trinity Guildhall practical examination earned him 90 per cent. That score placed Kavan as one of the four highest students in New Zealand across all grades and all instruments.

He said he took up guitar ‘‘just to learn something, really''.

Kavan said he was the only musical one in his family and he would like to get involved in a band in the future.

‘‘I'm doing grade two this year with the acoustic guitar, and eventually I'm going to . . . move to the electric guitar,'' he said. Mrs Kavanagh-Monaghan said Kavan was ‘‘a multi-talented young man who is involved in a number of areas of the school's talented and gifted programme''.

‘‘He's a very modest young man who carries himself as a good citizen and shows a real kindness and concern for others,'' she said.

The third successful pupil is 12-year-old Morgan Pearce who passed grade four speech and drama.
Morgan was awarded the Trinity Bronze Medal for the highest mark, 92 per cent, for grades one to five, for the Gore centre.

Morgan said he needed to slow down because he was going through the grades too fast.

‘‘I would end up having to wait a couple of years before I could sit my ATCL (Associate of Trinity College London), which would allow me to teach speech.''

Mrs Cavanagh-Monaghan said Morgan's grandmother, Noeline Smith, who died in 2005, was an ‘‘extremely good speech teacher who taught most of those teaching speech here today, so it must run in the family''.

Morgan said his speech training gave him the confidence to tackle other things, such as learning the flute and competing in St Peter's Eisteddfod competition.

‘‘Last year, I won the junior poetry at Eisteddfod and a modern school of music award for the flute,'' he said.