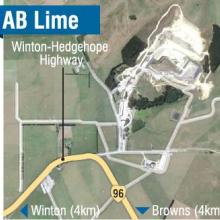 Questions have been raised over whose role it is to keep the public informed about the controversial AB Lime hearing.

AB Lime, which operates a landfill and a limestone quarry at Kings Bend, in Winton, applied to Environment Southland and the Southland District Council last year for 35-year resource consents to operate its landfill without a limit on how much waste could be dumped there.

At present, the regional landfill for Southland is limited to taking 100,000 tonnes of waste a year.

In its application, the company said Otago, Canterbury and the West Coast were all regions facing increasing infrastructure and capacity challenges, and it could take rubbish from those areas without increasing its footprint or ultimate capacity.

The site had recently received waste from the response to the bonamia outbreak and to Mycoplasma bovis.

Properties nearby were notified about the application, and many owners strongly opposed the expansion due to the smell, possible health consequences, possible road damage, truck movements and noise.

At an Environment Southland’s (ES) regulatory committee meeting yesterday, Cr Allan Baird asked whether the council had an obligation to advertise the hearing or if it would be left up to the media.

Acting consents manager Bruce Halligan said the council had already advertised and would continue to do so.

However, the only people who could make presentations at the hearing were submitters and the applicant.

"There are potentially going to be a lot of attendees and we’ve planned around that when considering the venue."

While he could not comment on the details of submissions, he described them as "thorough and traversed all the issues".

Due to the lack of in-house expertise, ES engaged a landfill engineer, an air quality specialist and an air technical specialist to review the application.

The hearing was set to take place in May.