Grey sky descended on Southland as hundreds of people mourned the loss of two much-loved mates killed in a car crash in Invercargill last week.

Konnor (16), Indaka Rouse (16) and Kyah Kennedy (16), all of Bluff, and Maru (17) died after a collision between the Ford Ranger they were travelling in and a truck near Queens Park in Invercargill at 4pm on Friday.

Both of yesterday’s services were filled with emotion, tears and laughter from people who honoured and remembered the teenagers’ lives.

In the morning, a crowd of more than 200 people attended Maru’s funeral at Nga Hau E Wha Marae in Invercargill. 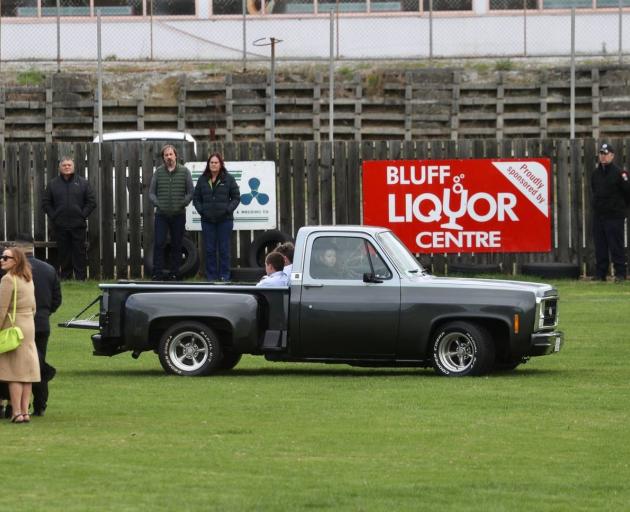 The coffin of Konnor Steele is driven across the Bluff Rugby Club field on the back of a ute. Right: Family and friends gather for Konnor’s funeral service. PHOTOS: THE NEW ZEALAND HERALD/LUISA GIRAO

Maori wardens helped control traffic around the marae as part of the road outside it was closed during the one-hour service.

Friends of Maru performed a haka before his coffin was transported to the Eastern Invercargill Cemetery, where he was buried.

Whanau spokesman Craig Teddy told 1 News that Maru was a "vibrant kid" who was passionate about rugby, his family and his iwi.

"In the community of Invercargill, we’ve felt it deeply that people hurt immensely ... In his own tribe is an immense sorrow at Maru’s passing."

About 20km away, in Bluff, hundreds of friends and family of Konnor gathered to pay their respects to the young man who was described as someone passionate about sports, hunting and fishing.

His coffin was decorated with handwritten messages. 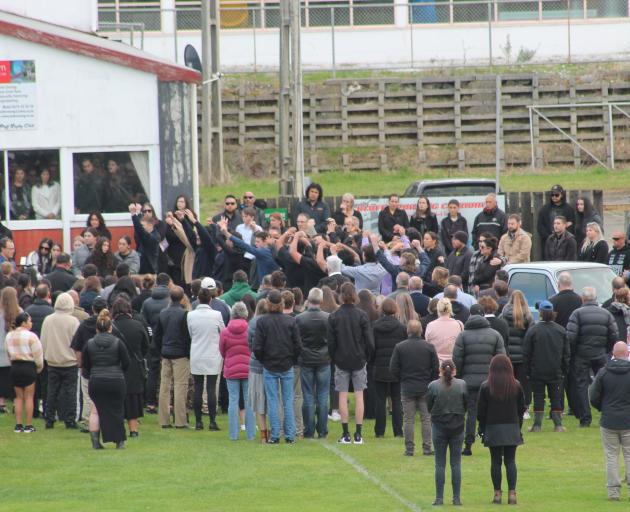 A haka was performed at the service, which was held at the Bluff Rugby Club.

Country music played while the coffin was placed in the back of a ute to be transported to Greenpoint Cemetery.

Grief was being felt across the region.

Foveaux Dairy in Bluff placed a sign at its doors saying the premises would be closed during the service and Invercargill business Latin Barbers gave all money from yesterday’s haircuts to support the four families impacted by the accident.

Owner Toma Waihiriri said all the team members there were "born and bred" in Invercargill.

All money raised would be split between the Givealittle pages of the four families, he said.

A police spokeswoman said yesterday the circumstances of the crash were still being investigated.

A service to celebrate Kyah’s life will be held today at Te Rau Aroha Marae in Bluff.