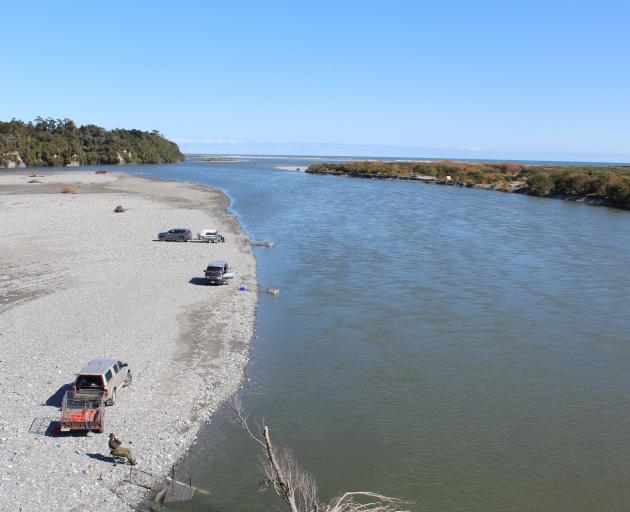 Whitebaiters on the Taramakau River on the West Coast. PHOTO: GREYMOUTH STAR
The population of Haast has doubled as whitebaiters pour back in, giving a welcome boost after the economy was ravaged by the post-Covid loss of international tourists.

Everyone is conscious this could be the last season before tougher fishing rules come into effect, including the possible closure of more rivers and the banning of screens and sock nets.

The West Coast Whitebaiters Association estimates the fishery could be worth as much as $30million annually to the region’s economy.

The association estimates that if visiting fishermen stay for the entire 70 days of the season they could spend as much as $14,000 on accommodation and food. If 20,000kg of whitebait was sold at the lowest estimate of $50 a kilo it would bring in $10million.

Up and down Coast rivers, caravans have been moved in, baches have filled up and camping grounds are busier than usual.

"There are caravans and buses all along the rivers."

"We have a lot of locals who come back year after year. All the businesses look forward to whitebaiting season bringing a bit of money into the village."

It is the same story right up the West Coast and into Buller.

On the Mokihinui River, the Gentle Annie camping ground has been welcoming the return of whitebaiters. Jesse Paley-Atkins said their arrival was helping out an "otherwise slow time of the year".

National Party list MP Maureen Pugh said she planned to catch up with Haast locals shortly about their views on changes to the fishery.

Part of her focus was to ensure the Coast was not affected by a blanket approach, including when it came to whitebaiting.

"We’ve got to remind the rest of the country we are really good stewards of the land." — Greymouth Star