A MetService spokesman said strong wind watches and warnings are force for eastern and southern parts of the South Island today and it was possible that severe gales could continue tomorrow. 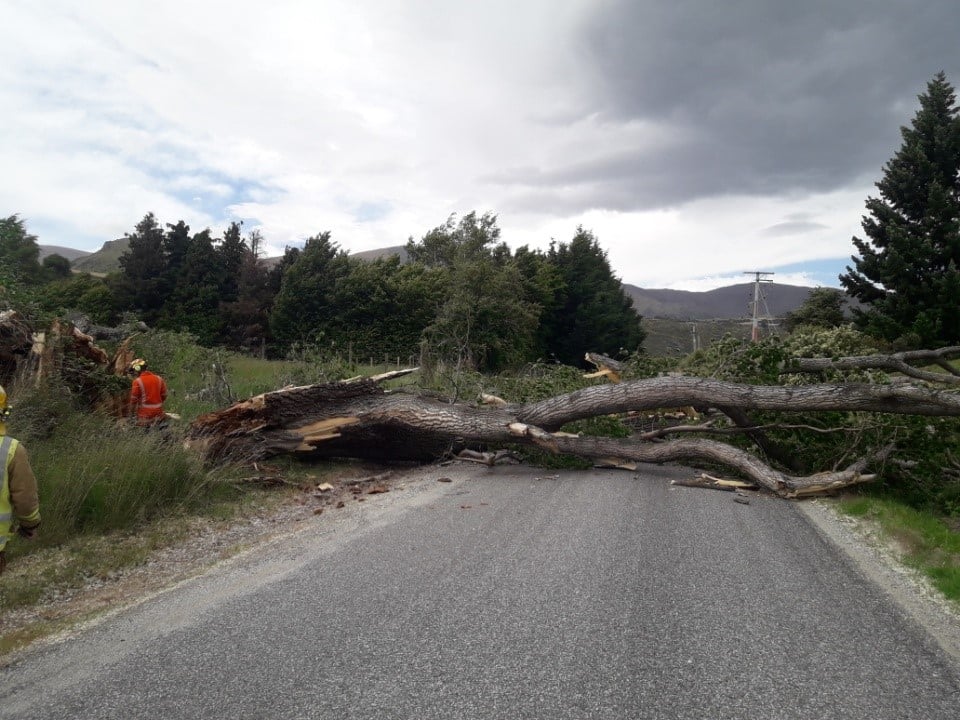 The Queenstown Lakes District Council said the road was open again, but asked motorists to drive with caution as there was debris and road cones still at the site. Crews would return tomorrow morning to clear up the area.

Cardrona Valley Rd near Wanaka was closed from Orchard Rd to Riverbank Rd due to a fallen tree for part of the day. Contractors have removed debris from the area and the road had reopened by 7.20pm. 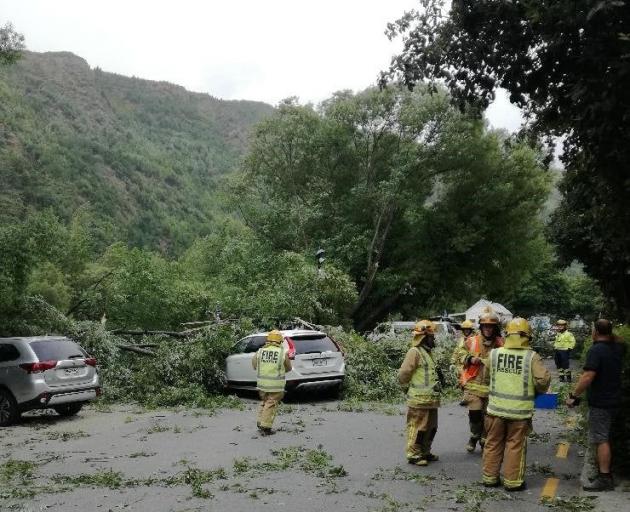 Crews clean up trees in Ramshaw Lane, Arrowtown. Photo: QLDC
In Wanaka, a short spell of wild weather brought down power lines to Cardrona, drove the elderly catamaran Lady Pembroke ashore from her mooring, and provided entertainment for a group of four young people riding the swimming pontoon in Roys Bay.

A crew was called to deal with a fire in a garden at the Wanaka War Memorial.

The nor'wester built up during the day and reached its peak about 3pm.

Mason Rd in Seaward Bush was blocked off this afternoon. Photo: Abbey Palmer
In Southland, a tree and power lines fell across a street in Invercargill, blocking one lane of the road.

Emergency services were called at about 2.45pm to Mason Rd, near Rockdale Rd, in Seaward Bush.

A police spokeswoman said no injuries were reported.

A cold front was forecast to move on to the South Island from the Tasman Sea this morning, preceded by a strong north-to-northwest flow, and followed by strong westerlies.

A MetService spokesman said strong wind watches and warnings were now in force for eastern and southern parts of the South Island.

Who is feeling the strong northwest winds over the eastern regions of the South Island? Mount Cook airport, sitting at 655m above sea level, is currently recording gusts of 104km/h - hold onto those sunhats 🧢💨🏃! Winds are expected to ease over the area by 11pm tonight. ^AC pic.twitter.com/2oRicfBPGs

An orange warning was issued for Wanaka, Queenstown, Fiordland, Southland (west of Lumsden) and Stewart Island between 8am today and 8am tomorrow, where severe gale north-to-northwesterlies were expected to reach 130kmh in exposed places, he said.

In North Otago, Central Otago, Dunedin, Clutha and the remainder of Southland, he said gale north-to-northwesterly winds were expected to develop this morning, then change to gale westerlies this evening.

The strongest westerly winds were expected mainly in coastal places. During this time, winds may approach severe gale, gusting to 110kmh in exposed places.

He said it was possible the severe gales could continue across the South tomorrow.