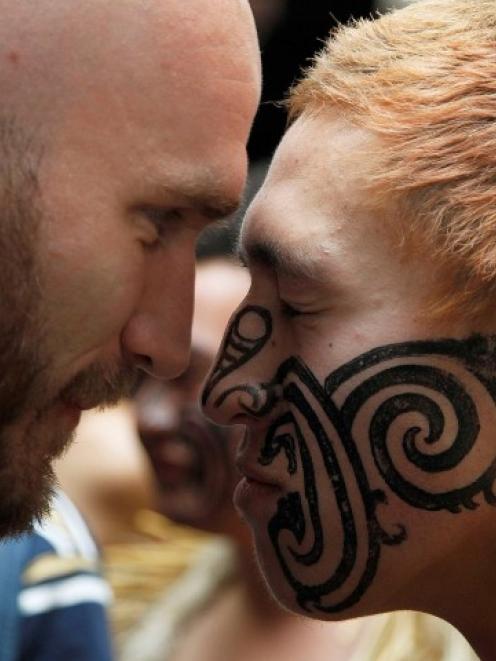 Scotland's Ally Strokosch (L) exchanges a hongi with a local after arriving at Invercargill airport yesterday. Photo: REUTERS/Brandon Malone
Fullback Chris Paterson will become the first Scottish player to feature in four World Cups after being named in the side for their opening Pool B match against Romania in Invercargill.

Paterson, Scotland's most capped player, will play in his 106th test in Saturday's clash at Rugby Park Stadium and will be hopeful of repeating his remarkable record of not missing a kick at the 2007 World Cup.

Paterson was one of eight changes made by coach Andy Robinson to the side that beat Italy three weeks ago with hooker Ross Ford, who will win his 50th cap, another to return.

"I'm delighted for Ross that he will win his 50th cap," Robinson told the Scottish Rugby Union website (www.scottishrugby.org)

"He's a great competitor who always works hard on the training pitch and is never content to 'just get by'. His game is about always seeking to improve."

Scotland face a tough ask to maintain their proud record of having reached at least the quarter-finals of every World Cup after being drawn in a tough pool alongside Argentina and old rivals England.

Despite being handed an easy start to their campaign against the lowly ranked Romanians, Robinson and his team will have little rest before their second match against Georgia on Wednesday at the same venue.

Despite such a short rest period in between matches, Robinson was not tempted to rest some of his key players.

"We have picked a strong side. There is competition for places and we could easily have picked another 15 as we did in the warm-up games," Robinson said.

"As ever, our key objective this weekend is to win the game and thus get a foothold in the tournament. We really respect Romania, who are a young side who are developing together.

"For us, we've trained really well in the last three months and it's now about going out and delivering."