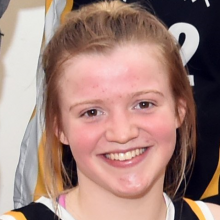 Aleisha Ruske
Perhaps it was not quite revenge.

But it was certainly an early-season statement.

Ajax beat the South Pac Magic in a rematch of last year's final to open the Dunedin women's club basketball season at the Edgar Centre on Tuesday.

Aleisha Ruske led Ajax with 18 points and poured in 11 of those during that third quarter.

That included two three-pointers and a three-point play, which helped extend the lead to 53-33.

It had been close until that point.

Tall Fern Zoe Richards scored 13 of her 16 points before halftime to keep Ajax ahead.

The Magic came back late as former Tall Fern Lisa Wallbutton (11 points) imposed herself on the game in the fourth quarter.

However, it was unable to haul in the 20-point deficit.

Dre Whaanga and Annabelle Ring had 25 and 22 points respectively for Andy Bay Kavanagh to comfortably beat the Andy Bay Falcons 84-46.

Tara Clement was the top-scorer with 13 points in an evenly-spread scoring effort for Varsity.