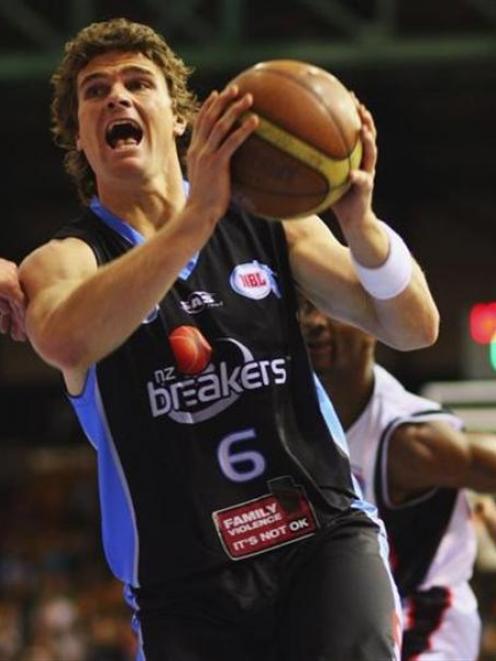 Breakers shooting guard Kirk Penney (above left) drives to the basket during the round seven NBL game against the Perth Wildcats in Auckland in October.
The New Zealand Breakers entered the Australian National Basketball League with a hiss and a roar in 2003. Once the emotion died down, the franchise found the going tough. But clever recruiting and persistence has helped position the club as a genuine title contender this season. Basketball writer Adrian Seconi talks to head coach Andrej Lemanis about the turnaround.

The Breakers are one of the few good basketball stories in New Zealand and everyone, it seems, now wants a piece of the team.

It was not that way nearly four years ago when coach Andrej Lemanis took over the reins in March 2005.

The franchise was struggling to win games on the road and make an impact in the league.

Success was far from immediate for Lemanis, but he maintained belief he could turn the side around and get the public and the media back on board.

"When times were tough we were able to keep our heads whilst all around us were asking for them," he said, with a hearty laugh.

"We believed if we stuck to it good things would happen for us and we are starting to see the results of that now."

Lemanis said the entire organisation, from the coaching staff to administration to the management, deserved a share of the credit.

And then, of course, there is the talented roster the Breakers have been able to assemble.

Securing star Tall Blacks guard Kirk Penney last season and signing key playmaker CJ Bruton this season has given the club the firepower to compete and beat the best sides in the league.

"Obviously, we've got good players in but just as importantly they are good people and fit our values structure.

"It [the Breakers] is a good place to be and at the end of the day, having a happy camp helps you recruit players.

"It's great when someone like Kirk, who could play anywhere in the world, chooses to come back and play at home.

"You see how he plays - he's obviously a great player. But one of the best things about Kirk is he is a great team person. And CJ is more of the same."

Suddenly, with the Breakers winning, the crowds are up, media interest has increased and everybody wants to talk about basketball.

"Seems to be everyone you bump into has watched the game on television which is pleasing, and it's good for the sport if we can get people interested in basketball."

The Breakers have been a boon for a sport which has had little to cheer about in New Zealand as of late.

The Tall Blacks are on the slide after a string of retirements and two South Island teams have dropped out of the National Basketball League.

The Canterbury Rams were a foundation team but will not be suiting up in 2009 after financial struggles forced the franchise to pull out.

The Otago Nuggets' 18-year history came to an end when the Basketball Otago board was not able to raise enough funds to support a campaign.

Across the Tasman, the Brisbane Bullets and Sydney Kings have folded and the Cairns Taipans and Sydney Spirit are under enormous financial pressure.

But despite the global credit crunch, the Breakers announced in mid December existing sponsor Bartercard would increase its sponsorship.

Having toiled in the league for the first four seasons the Breakers cracked the top eight for the first time last season and shocked the Cairns Taipans on their home court in the first round of the post-season.

Brisbane proved too strong in the second round but the experience helped set the Breakers up for what has been a very successful 2008-09 campaign so far.

The club has a 15-4 record and has cured its inability to win consistently on the road, having won seven of its eight away games.

Amazingly, their away record shades their home results (8-3), and the Breakers are the only team in the league with a better away record.

The team seems to flourish without any distractions.

"We actually enjoy getting on the road because we feel like we have a good chance of winning. There is certainly a confidence and experience within this group that understands how to play and win on the road."

If there is an area where the Breakers are letting themselves down it is in defence.

They live or die with their shooting from the three-point line and when their defence is not going so well, they are vulnerable.

It is a point not lost on Lemanis.

The team has been working hard to overcome its deficiencies and has shown improvement.

"I think it [the defence] has been getting better and certainly in Perth, during the third and fourth quarter, our performance indicated we've made strides there."

If the Breakers shore up their defence, then with their firepower there is no reason why they cannot complete a remarkable turnaround and celebrate with a trophy at the end of the season.

NZ Breakers For the record 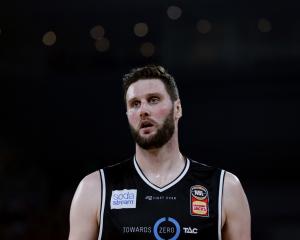 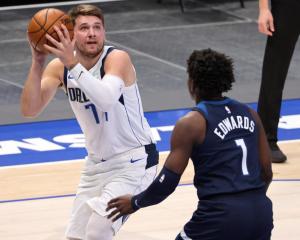