The lessons have been brutal for the Southern Hoiho.

There have been patches of good basketball and flashes of brilliance.

But, for the most part, the inaugural season of Tauihi Basketball Aotearoa has been one of adjusting, as the team has slumped to a 1-9 record.

The level of this league is significantly higher than anything seen in New Zealand previously.

There is a contingent of high-calibre imports and a group of top New Zealanders who ply their trade overseas that were not there before.

Sometimes you have to be exposed to that higher level to learn how to play at it.

That shot that has been open your whole life — that is now getting blocked.

The scoring move that has always been your go-to — the defence is stopping it.

Where moving as the offensive player catches the ball in your defensive rotations has always been fine — that is now too late, and giving up an open jump shot.

Understanding scouts on players, adapting and making reads as the opposition makes tactical adjustments — all of it is so much more meaningful.

However, if the point of Tauihi was to grow the women’s game in this country, that is what is happening here.

Players are having to learn how to be effective at a higher level.

They will get the chance to implement those lessons again tomorrow, when they host the Mainland Pouakai at the Edgar Centre.

"That’s what I said to them from the very beginning," Hoiho coach Natalie Visger said.

"This is going to be something most of you have never experienced.

"Two of our imports have had professional experience, they understand the level and what it takes.

" ... the others are learning as they’re going. [Import] Tori [Dugan’s] straight out of uni, our locals are all figuring out what this really means. It’s a big eye-opener.

"They’re really embracing, I’d have to say that, they’re embracing it and going for it. That’s been the best part. They’re really good to each other and they’re fun to be around."

There have been major improvements, but Visger was not celebrating being a plucky underdog.

Wednesday night’s loss to the Tokomanawa Queens showed what the team could do, as it mounted a furious comeback.

But it happened after falling behind by 38.

Visger felt the focus in the group had turned too much to scoring — as that was what the team struggled with — and switching off on defence.

While improving on its weaknesses were important, she said the team needed to excel in its strength all the time to win.

Likewise, while the comeback was great, the team needed to be doing that from the start.

"It’s all well and good we can do these things, because we know we can. But we need to do it when it counts.

"I’m not big on moral victories. We acknowledged it because they didn’t give up. They also said they’re starting to move the ball better.

"They’re starting to break the game down a bit more, which is good. Why were we successful? Not just that we went on a big run, but why?

"That’s how you do it. Analyse why were we successful — can we continue that?

"They know me, none of us like to lose, I lose sleep every night after the games. It’s not where I want to be." 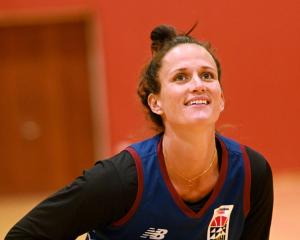