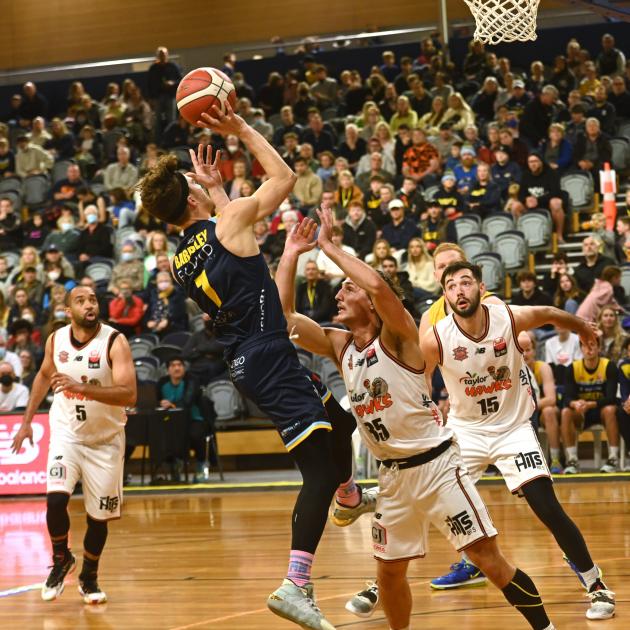 Nuggets guard Matthew Bardsley puts up a shot watched by Hawks players (from left) Everard Bartlett, Jack Exeter and Jordan Hunt. PHOTO: LINDA ROBERTSON
There did not seem any special significance as Todd Withers was fouled at the hoop by Hyrum Harris.

Certainly it did not seem like the moment the Otago Nuggets would flip the entire game.

Harris objected to the call — and perhaps he had a point.

But as a clearly frustrated Hawke’s Bay Hawks star let out a loud expletive when he returned to the bench for the ensuing media timeout, it was a sign this team had been broken mentally.

They led 66-58 at that point, Hawks guard Derone Raukawa having lit up the Nuggets to open the gap midway through the third quarter.

When they returned to the court, the Nuggets lifted and the Hawks crumbled.

Keith Williams soared to throw down a transition dunk shortly after — off a Harris turnover — to make it 69-69, forcing a timeout from the visiting side.

As the Hawks walked solemnly back to their bench for the ensuing timeout, they looked all but defeated.

The Nuggets had seized control, riding a 14-0 run to finish the third quarter, while holding the Hawks to 11 points in the fourth quarter.

Otago emerged a 94-80 victor at the Edgar Centre on Saturday night — finishing on a 36-14 run after Harris’ meltdown — extending its home winning streak against the Hawks to four games.

Williams perhaps took objection to being abused by the Hawks bench, after a minor first-quarter scuffle.

He unleashed on the star-studded visiting side, pouring in 19 of his 23 points in a mammoth third quarter, getting to the hoop at will in the defining stretch of the game.

It was far more than just that, though.

Defensively the Nuggets lifted midway through the third quarter and were elite for the rest of the game.

Sam Timmins and Todd Withers deleted anything that came near the hoop — finishing with six and three blocks respectively.

Those stops allowed the Nuggets to get out in transition, where the Hawks could not keep up — more than once appearing uninterested in getting back on defence.

Withers had been sublime at the other end too.

The forward hit seven three-pointers and had 30 points on 10-of-16 shooting — notably pouring in 16 first-quarter points, helping dig the Nuggets out of a 16-4 hole early on.

McCall’s impact was perhaps not so eye-catching.

However, the import’s real value came in holding arguably the league’s most dangerous scorer, Ethan Rusbatch, to 3-of-17 shooting.

Being on the second night of a back-to-back may have told for the Hawks, but this was also a Nuggets team ravaged by the flu, having not trained until Friday due to the majority of the squad being struck down.

"We got the ball enough to Sam [in the second half], we didn’t get it too him too much in the first half. We started getting it down low and started putting pressure on [Jordan] Hunt.

"We got him in foul trouble and that started opening things up.

"I guess the key thing is we came out and got stops. They had 47 at the half, 12 offensive boards and we held them to four in the second. That’s really important that we lock up on defence."

The Nuggets hauled that in as Withers found his stroke and the score remained tight from there, the Hawks leading 47-44 at halftime.

At that point Raukara began to take over, while former Nuggets big man Jordan Hunt (15 points) reminded his old team of his range, popping in two from deep to make it 66-58.

The Nuggets lifted from there, generating stops and riding the momentum to victory.