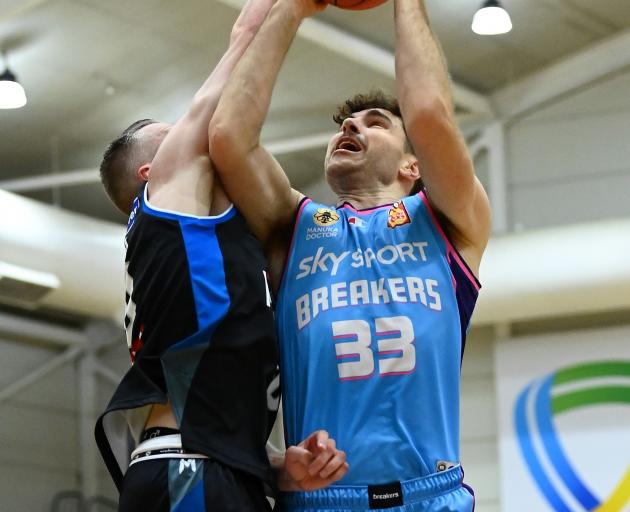 On court, the Otago basketballer has been exposed to a level of detail he has never experienced.

Off it, he is seeing what it is like to be in a genuinely professional environment.

Both have shown him the significant step up to the Australian National Basketball League from the New Zealand league.

He will begin his season as a development player (DP) with the New Zealand Breakers on Saturday, as the team faces Southeast Melbourne Phoenix in Melbourne.

The Breakers’ preseason was disrupted as Covid-19 entered the squad.

Timmins avoided the virus, although he was confined to his room for a week as the team isolated.

While that had been difficult, he was enjoying being back on court and excited for the first game.

"Obviously, as a DP, it’s not certain I’ll get on the court. But I think the coolest part — honestly, I’m proud of myself for this season — is just accepting that I may not get on the court.

"That’s just the nature of the role I’ve stepped into, and I’m happy with that.

"But regardless of that, I’ll be hissing to play. I’ll be ready every second I’m on that bench, if my name gets called."

Timmins earned the Breakers spot after an outstanding season with the Otago Nuggets.

He said the trust the team had given him to make plays and have the ball in his hands had been significant in restoring his confidence.

That had flowed on to his first preseason Breakers game, in which he had 10 points and seven rebounds against Melbourne United.

Having spent much of the preseason learning details and "getting berated multiple times" as he adjusted to a new setup, he found it good to go out and just play.

"That first game was good for me.

"I’d spent a lot of the preseason behind the eight-ball, a lot of time learning and trying to find my feet. When I got out there, I was able to just go all guns blazing and play my heart out.

"I had some success and I felt like I can really go at this level — not just hold my own, but go really well."

The stage the Australian NBL provides has grown in the recent years.

He spent four years playing at college basketball’s highest level in the United States, at the University of Washington, matching up with some of the game’s top athletes.

The experience the players in the NBL had was also significant.

Facing men who had spent many years learning how to operate at that high level made it a step up.

The way the players approached the game was different as well.

"Everyone’s at college to get to the NBA, at least in the Pac 12, where I was.

"Now we’re at a level where people are still trying to progress and get to higher levels.

"Now it’s more about learning how to contribute to a team and contribute to get wins, rather than putting yourself on the map, which is awesome for me.

"Learning how I can use my skill set, and my abilities, to help a team win, is what’s
going to get me paid, and take my basketball career as far
as I can go."

While he has had spent plenty of time overseas — notably during his time at college — he felt he would never get used to the long stints away from home.

That was ahead of him at the moment, as the Breakers could be based in Australia for the entire season.

What that means for next year’s New Zealand league remains up in the air.

Timmins said he had been on Zoom calls with Nuggets staff and was excited to see what the new ownership would do for the team.

He added no New Zealand team meant more to him than the Nuggets.

However, his focus for now was on the Breakers and he had not put too much thought as to where he would sign beyond that.