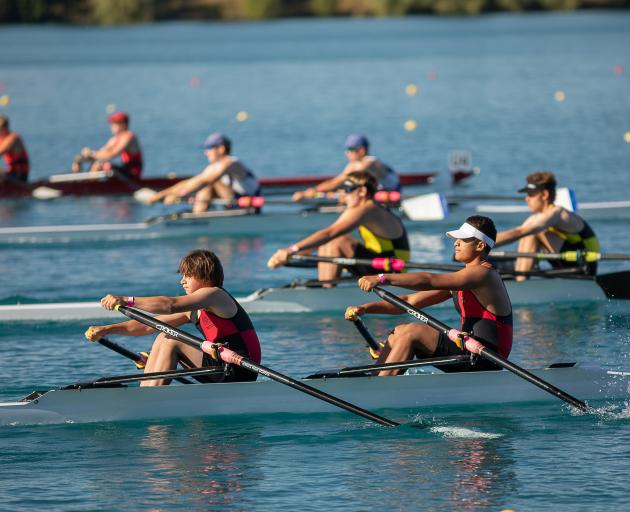 Matt Taylor (front) and Kanye Taiata row for North End in Taylor’s new boat at the Canterbury rowing championships last month. PHOTO: SHARRON BENNETT
Rowing would be the last thing most people in Matt Taylor’s position would be thinking about.

Asking for a boat of their own as their one wish?

It would not even come to mind.

But the 15-year-old has never been one to let setbacks stop him.

Taylor was diagnosed with an advanced-stage kidney disease two years ago.

For most people, it would be debilitating.

But it is something the King’s High School pupil, who is entering year 12 this year, has met head-on.

‘‘I haven’t stopped any sport because of it, or anything like that.

‘‘I don’t want to be treated any differently to what I was. It’s just the same.’’

He continues to play rugby, and was the hooker in the under-15 Panthers — the age-grade’s top team — last year.

This year, he intends to move to halfback and hopes to make the King’s Second XV.

To help that, he started rowing as a form of pre-season training this summer.

It turned out he loved it.

So, when the Make A Wish Foundation came to him six months ago, it was to his new sport that he turned.

His initial wish had been for a Hilux — but he does not have his driver’s licence.

He then thought about a trip, but that was risky given the pandemic.

Then he remembered the boat he had been rowing in with his friend Kanye Taiata.

‘‘The King’s double is ancient. Rowing’s not that big at our school, so we’ve only got a few boats,’’ Taylor said.

‘‘The double has holes in it. The last regatta it filled up with water, and it doesn’t have proper feet in it.’’

Initially, a new boat was going to take until April to arrive.

But Taylor’s sister Claire, who rows for the Otago University club, called on her connections.

University rowing general manager Glen Sinclair sorted a boat and, together with Make A Wish, had it refurbished within two weeks.

It was named after Taylor, and the oars bear his name.

Taylor and Taiata have been rowing in it since December, as have other teammates at the North End club.

He said it was good to row, and he has performed well in it — both in the novice and age-group grades.

It will remain his as long as he continues rowing, but when he decides to move on, he intends to donate the boat to King’s to ensure other pupils can benefit from it.