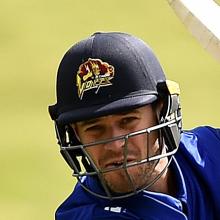 Carisbrook-Dunedin/Kaikorai all-rounder Josh Finnie clobbered 12 sixes and 20 fours in an extraordinary innings to help his side post a large win against Green Island at Bishopscourt on Saturday.

The Otago contracted player whacked 185 from 123 deliveries to guide his side to a formidable 326 for eight declared.

Those quick at maths you will have already worked out 152 of those runs came in sixes and fours.

He probably barely broke a sweat with the odd single he actually had to run.

There were other contributions. Vinay Chandrappa added an undefeated 40 and Richard Sillars chipped in with 29.

Seamer Ryan Whelan stuck to the task for Green Island and was rewarded with four for 77, while opener Gregor Croudis did his best to keep his side in the chase with a fine knock of 93 from 104 balls.

Finnie picked up three wickets to complete a good day, and Kurt Johnston took four for 59 to help dismissed Green Island for 178 and win the game by 148 runs.

McKenzie nabbed four for 32 and Clout four for 37 at Tonga Park.

Hunter Kindley top-scored for North East Valley. He made a patient knock of 66 from 118 deliveries.

With a bit more support his side would have been able to post more than a modest tally of 141.

The chase was a formality thereafter. Jesse Simpson saw the job through with 36 not out to secure a comfortable victory.

Albion has two wins from two games in the declaration tournament and leads the competition standings.

He had some quality help at the top. Regan Flaws (two for 12) and Nathan McNicol (two for 23) accounted for the majority of the top order and Lockrose ripped out the rest.

He took the final five wickets to fall in a wonderful 7.2 over spell.

University-Grange was all out for 92 in the 29th over. Seb Kyle top-scored with 16 in a dismal scorecard.

Earlier, Taieri posted 193 for eight. Cameron Jackson (37) and Flaws (39) made solid contributions but Dwayne Weir anchored the innings with an undefeated knock of 60 from 124 deliveries.