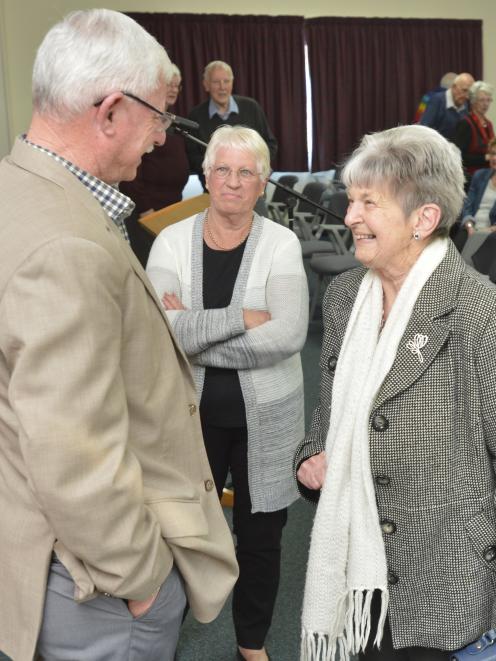 Sir Richard Hadlee chats with Kay Moen (right) and Brenda Cordelle after his presentation at Chatsford Village in Mosgiel yesterday. PHOTO: GERARD O'BRIEN
You start by aiming at the base of off stump and go from there.

Hadlee was in Dunedin yesterday to speak at Chatsford Village village in Mosgiel and told the Otago Daily Times Smith had "been phenomenal".

"You have to admire and respect his achievements in recent times. He's second to Bradman or the next Bradman," Hadlee said.

Smith has been in sublime form during the Ashes series. The 30-year-old right-hander is closing in on 7000 test runs and averages close to 65.

And while Hadlee chuckled when asked how he would go about removing the champion batsman from the crease, he came up with a plan pretty quickly.

You would expect that from someone who took 431 test wickets at an average of 22.29.

"I think initially you attack that off stump and try to get him out, because he moves around a bit.

"I'd find him pretty frustrating with his idiosyncrasies. But you test him out in that area and if he survives, and he starts playing at you square, you try something different.

"You could try to get him lbw. But if you miss, he is going to get a lot of runs off his pads, so you would probably move in and out a wee bit."

Hadlee enjoys one-day and twenty20 cricket but test cricket remains the ultimate as far as he is concerned. He has been thrilled with the advent of the ICC World Test Championship.

It gives the game a wider context.

"There is no doubt 50-over and T20 cricket is sort of taking over the game. Test cricket is so important and it needs to be preserved.

"It is the foundation on which the game is based. Test cricket was the ultimate.

"But they need to find ways to liven it up a bit and be a bit different, so they have come up with the test championship, which is good."

Like a lot of us who watched the World Cup one-day final between New Zealand and England, Hadlee was disappointed with the final result.

The scores were tied after 100 overs of cricket and tied again after the super over. England was declared the winner on a boundary countback.

"I don't think anyone would have envisaged, at the start of play, that there would be two tied results. And I don't think anybody knew that the tiebreaker was who hit the most boundaries.

"I felt that was a real strange one. There was an obscure ruling that determined the result.

"The simple solution was to have another super over or share it.

"I don't think anyone would have argued had it been shared, but the extra super over was the obvious solution."