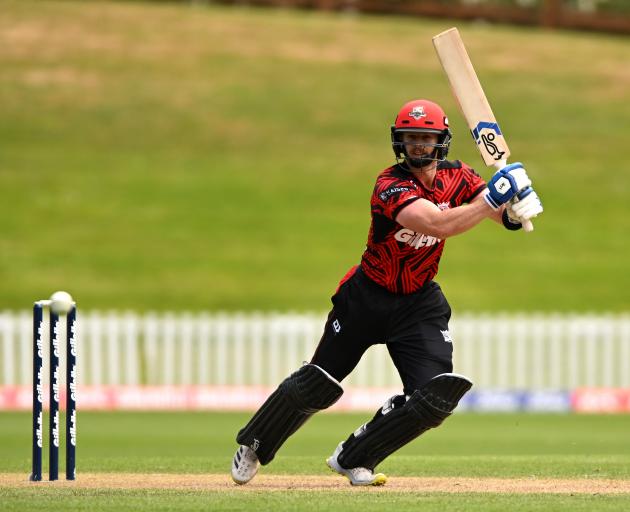 Cam Fletcher plays a cuts shot during his unbeaten innings of 63 in Canterbury’s win over Wellington in Dunedin yesterday. PHOTO: GETTY IMAGES
A spot in the final seemed well within the Wellington Firebirds’ grasp.

A decent total on the board, two big wickets in the bag early and a Canterbury Kings team behind the run rate boded well.

But a late flurry from Cam Fletcher and Leo Carter pulled the Kings back.

Fletcher smashed 63 off 25 balls to guide Canterbury to a six-wicket win in yesterday’s Super Smash elimination final at the University Oval.

It will play the Northern Brave in tomorrow’s final.

Canterbury was 93 for four when Fletcher joined Carter at the crease with eight overs remaining.

The run rate had slowed through the middle of the innings and the team had just lost two wickets in three balls, including Chad Bowes for 51.

But Fletcher and Carter, who finished on 44, were able to find the boundary.

They were left needing 31 off their final two overs.

Fletcher took 18 off the next five balls, then a Carter boundary off the final ball made it 22.

They picked off the nine remaining runs with three balls to spare, a Carter six finishing the job.

Earlier, Wellington had seemed in control. After Canterbury seamer Matt Henry claimed the scalps of Finn Allen and Tom Blundell in consecutive balls in the first over, a third-wicket stand set a solid platform.

Michael Bracewell joined Devon Conway at 12 for two and they put on 143 together.

It was a quality partnership, although the seven wickets they left in hand suggested perhaps they could have pushed the run rate a little more.

Nevertheless, Bracewell made an impressive 81 off 54 balls, while Conway was unbeaten on 74 off 52 balls.

Wellington finished on 190 for three and, though it conceded 30 off its first two overs in the field, looked in the box seat after removing the Canterbury danger men early.

Tom Latham was bowled trying to hit Logan van Beek down the ground, then Daryl Mitchell was caught on the long on boundary.

The scoring slowed through the middle as the Wellington bowling tightened.

However, Canterbury was aggressive late in the innings with wickets in hand to chase down the total.