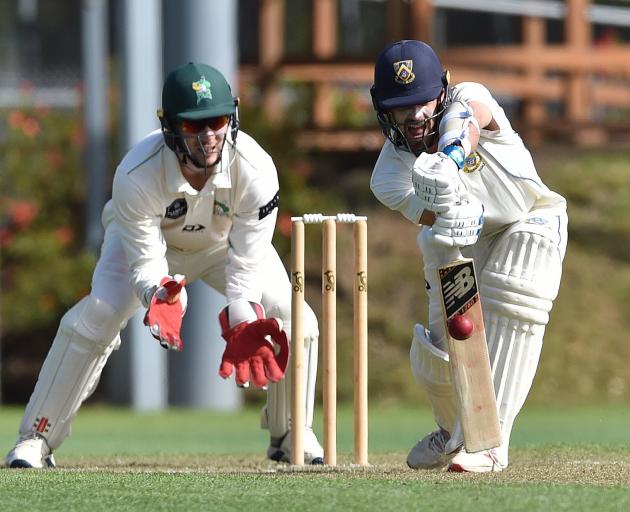 Michael Rippon, here playing the ball in front of Central Districts wicketkeeper Dean Cleaver, made significant contributions with both ball and bat for Otago this season. PHOTO: GREGOR RICHARDSON
Otago has been grappling with the same problem for more than 30 years.

It has not been able to consistently score more runs than its opponents and this season followed a similar script.

Otago has not won the first-class competition since 1988 when players such as Warren Lees, Ken Rutherford, Stephen Boock and Neil Mallender graced the side.

Boock, a left-arm spinner, took 41 wickets in that campaign. That was 10 more than anyone else and 12 more than West Indies great Michael Holding, who had a season for Canterbury towards the end of his career.

But as good as the bowling was that summer, Otago also had three players who averaged more than 50 that season the Richard Hoskin who scored 599 runs at 49.91, including three centuries.

The Volts managed only three centuries during its campaign this season.

Experienced opener Hamish Rutherford, whose father Ken played in that champion Otago side in 1987-88, scored 111 against Central Districts.

But those were among the rare batting highlights.

The batting line-up had been depleted with the retirement of Neil Broom from red-ball cricket and Dean Foxcroft’s continued absence.

The South African-born player was unable to return to New Zealand due to border restrictions.

The Volts certainly missed Broom’s experience and Foxcroft’s absence was felt most acutely in the limited-overs formats.

There just was not enough grunt in the top order. That showed in the opening game of the season against Auckland.

The Volts capitulated to be all out for 186 and just 54. Auckland won by an innings and 129 runs.

The batting got better as the season wore on. Phillips, who was one of the success stories, stroked 83 not out to help set up a rare win against Wellington at the Basin Reserve in game three.

The side showed some character to hold on for a draw against Canterbury at Molyneux Park.

That was an impressive effort by a young man with a bright future.

Otago’s win against Central Districts in Dunedin highlighted how useful Rippon could be at the next level.

The left-arm wrist spinner took a career-best six for 66 to help seal the 44-run win.

He was also tremendous value with the bat. The former Dutch international scored 497 runs at an average of 45.18 and grabbed 22 wickets at 34.86.

Those are very solid numbers in both disciplines. He was Otago’s best player in the format.

Otago was able to compensate for some average batting with much better bowling.

Michael Rae was the second leading wicket-taker in the competition. The right-arm fast bowler nabbed 29 at 34.31 and claimed a stunning hat-trick.

Only seven other players have managed that feat for Otago.

Jacob Duffy (22 wickets at 22.27) missed a couple of games through injury but still finished in the top five.

And, as mentioned, Rippon was good as well. He struggled a little early on but the surfaces were more to his liking in the later half of the competition.

He was unlucky not to pick up a second five-wicket bag for the season in the narrow loss to Northern Districts earlier this week.

Rippon had forced a couple of mistakes from Jeet Raval but a stumping went begging and a catch went down.