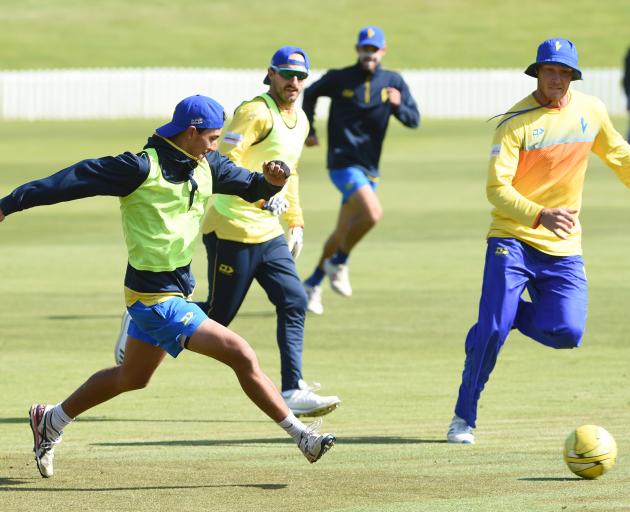 Otago keeper Max Chu passes the ball during a warm-up session at the University of Otago Oval yesterday. Hamish Rutherford (left), Michael Rippon and Matt Bacon look on. Photo: Gerard O'Brien
Otago all-rounder Nathan Smith has recovered from a hip flexor injury and will take his place in the squad for the elimination final against Auckland in Dunedin today. 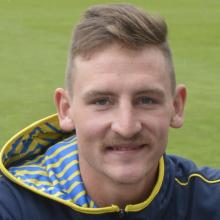 Nathan Smith
Smith has been sidelined with the complaint since pulling up lame during the six-wicket win against Northern Districts in Alexandra late last year.

Despite having missed the past five games, the 21-year-old is Otago’s second-highest wicket-taker with nine scalps at an average of 15.11.

He was instrumental in Otago’s strong start to the Super Smash and his variations at the death will be a big asset for the Volts against a quality Auckland batting line-up.

Seamer Matt Bacon drops out of the side to make room for Smith and specialist keeper Max Chu replaces Mitchell Renwick with the gloves.

Auckland has named an unchanged squad. The Aces made a slow start to the tournament but have rallied in the second half of the campaign to earn a spot in the elimination final.

Otago beat Auckland by 13 runs at Eden Park Outer Oval in round one. The return game in Dunedin was ruined by poor weather but Otago was under the pump a little when the rain arrived. 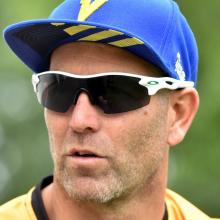 Rob Walter
The visiting side boasts a formidable batting line -up which includes world-class players such as Martin Guptill and Colin Munro.

But Otago’s top order is arguably the form batting unit in the tournament.

The top four have been batting so well it has actually created a weakness of sorts.

The Volts looked on track to post a huge score against Canterbury in Christchurch on Tuesday but were not able finish the innings.

Neil Broom and Nick Kelly struck rapid half-centuries but both got out with about five overs remaining.

The incoming players struggled to bat with the same fluency and a much bigger score went begging. Otago was perhaps 20 runs shy of a more competitive total and Canterbury clinched a six-wicket win.

Finishing off the innings better "is definitely something we’ve discussed" going into the elimination final," Volts coach Rob Walter said.

"There are pros and cons to your top four batting so well because the guys in that middle to lower order don’t get much time in the middle," he said.

"And when they do come in they are expected to go at a high strike rate, so it is a tough gig.

"I think the key for us was losing two in batsmen going into the final phase of the innings.

"That has hurt us twice before, so that is one of the things we need to improve on."

The forecast is for fine weather with northeasterlies, strong at times.

The pitch is a fresh one and should offer plenty of runs.

The winner of the elimination final will play Wellington in the final at the Basin Reserve on Sunday.