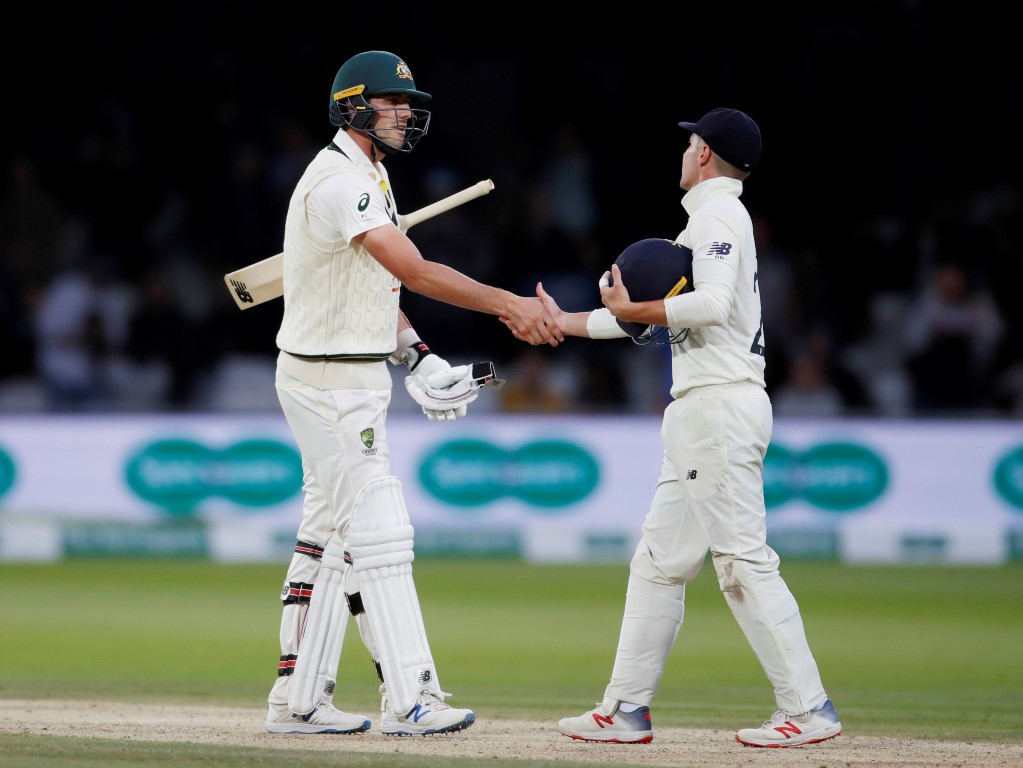 Australia's Pat Cummins and England's Rory Burns shake hands at the end of play as the second test ends in a draw. Photo: Reuters
The second Ashes test was drawn as Australia, chasing 267 to beat England, ended on 154 for six after an absorbing final day at Lord's on Sunday.

Ben Stokes made a brilliant century and England declared on 258 for five before Jofra Archer claimed two early wickets to give the hosts the sniff of an unlikely victory.

But Marnus Labuschagne, replacing Steve Smith as test cricket's first substitute, made 59 and Travis Head an unbeaten 42 to lead the Australians to safety and keep them 1-0 up in the series.

Smith was ruled out of the final day suffering from concussion symptoms after being struck on the neck by an Archer bouncer on Saturday and Labuschagne was hit on the helmet by the second ball he faced from the Barbados-born fast bowler.

The 25-year-old right-hander was able to continue batting, however, showing courage and composure under intense pressure to reach his second test fifty in his sixth match.

Stokes scored 115 not out, hitting three sixes and 11 fours, as the hosts added 162 runs to their overnight score to give themselves a chance of levelling the series.

"It was important we bounced back strong and we have done that. We have proved we are massively in this series," England captain Joe Root said.

"We had to get to a score that we felt we were in control. We managed to do that. Ben played exceptionally well and then we threw everything we could at them. Fair play to Australia."

After resuming on 96-4 following another rain delay, Stokes and Jos Buttler dug in to take England to 157-4 at lunch.

Buttler fell for 31 but Stokes went on the attack and brought up his seventh test century, adding a quickfire 97 with Jonny Bairstow, who finished unbeaten on 30.

Archer removed David Warner and Usman Khawaja to continue his fine test debut as England reduced Australia to 46 for two at tea.

Warner was caught at third slip by Rory Burns for five and Khawaja nicked the ball to wicketkeeper Bairstow to leave Australia reeling at 19-2.

When spinner Jack Leach trapped Cameron Bancroft lbw for 16 England sensed the chance of pressing for victory but with Archer tiring they struggled to cause problems for the batsmen.

Jason Roy dropped Head at second slip off Stokes and the hosts' realistic hopes of winning the match were over.

Labuschagne fell to Leach, Root diving forward to clutch the ball before a lengthy video review to confirm it had not touched the ground.

Matthew Wade tamely prodded the first ball of Leach's next over to Buttler at short leg but captain Tim Paine survived the hat-trick delivery.

Although Archer steamed in, he could not make another breakthrough and in fading light the players shook hands at the end of a match heavily disrupted by rain which washed out the first day and most of the third.

After only the second draw in the last 35 tests in England, Australia head to Leeds for the third match starting on Thursday on course to win the Ashes on English soil for the first time since 2001, but Smith's fitness will be a matter of serious concern.

"We were probably a fair way off our best in this test match," Paine said. "Part of becoming a good team is finding a way to come through the last half-hour like today."