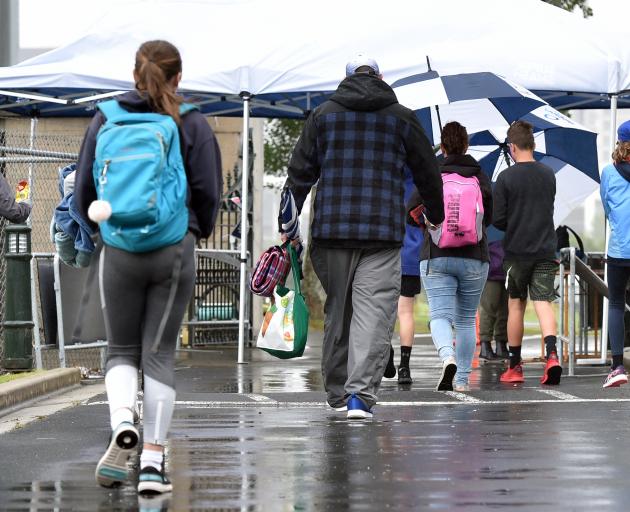 Disappointed fans trundle out of the ground. PHOTOS: PETER MCINTOSH
Suzie Bates spent a couple of hours trying to avoid her team-mates at the University of Otago Oval yesterday. 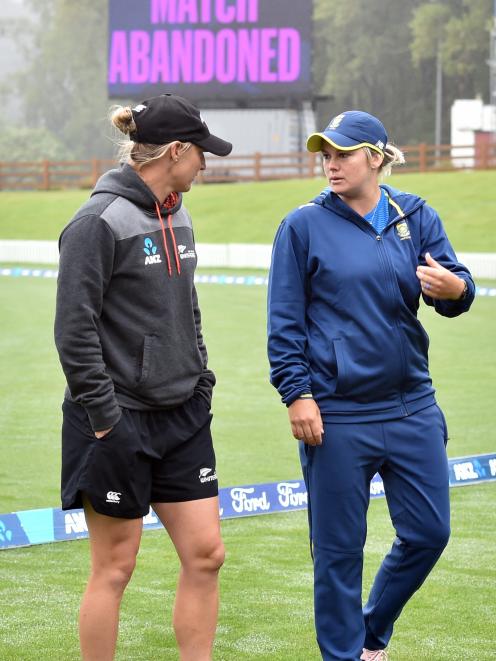 New Zealand captain Sophie Devine and South African opposite Dane van Niekerk wander off after the fifth and final game of their T20 series was abandoned without a ball bowled in Dunedin yesterday.
The White Ferns all-rounder knows she can expect a good ribbing about Dunedin’s infamous weather after the fifth twenty20 against South Africa was abandoned without a ball bowled.

It is not the first time the city has hosted an international only for the fans to leave bitterly disappointed not to have seen any cricket. But few will have been as disappointed this time around as Bates or fellow home-grown player Katey Martin.

The pair have combined to play nearly 400 games of cricket for their country and yesterday’s fixture would have been their first in Dunedin.

The city had not hosted a women’s international since February, 1999, so it has been a long wait.

The rain not only washed away a chance to play in front of family and friends, but it robbed Bates (115 games) of an opportunity to join classy Australian all-rounder Ellyse Perry on the most international T20 appearances.

"I woke up very excited and I looked at the weather forecast and it did not look that bad. But I think we jinxed it because we were so excited," Bates said, gesturing towards the falling drizzle.

"But on the positive side it is probably not a bad thing we have a wee rest before we fly off to the [twenty20] World Cup. It is just a shame it had to be in Dunedin.

"I’ve avoided them [my team-mates] most of the afternoon because I couldn’t take their jokes. But I’m sure we will be back because there has been a [one-day] World Cup game announced in Dunedin.

"We are not sure which one but we have got a game here."

The one-day World Cup is being staged in New Zealand next year but there is a Twenty20 World Cup to get through first.

That tournament gets under way in Australia later this month and the White Ferns squad leaves today.

"Winning this series against a pretty good South African side is good result. It would have been nice to play today and potentially have a few more batsmen in the middle.

"Sophie [Devine] has obviously dominated this series but we know at the World Cup it is going to take a team effort, so we just want to make sure all of our batters get an opportunity.

"But we’ve got two warm-up games in Adelaide so that is going to be helpful, and the group has played a lot of cricket this summer."

The umpires and groundsman discuss the prospects of play at the University Oval yesterday.
The White Ferns opening pool game is against Sri Lanka in Perth on February 22.

Australia, India and Bangladesh are also in group A, so it is a tough pool.

Devine was named player of the series.

She scored 297 runs in the first four games against South Africa at an average of 99. She also nabbed four wickets, while 19-year-old leg-spinner Amelia Kerr picked up five wickets at an average of 14.40.