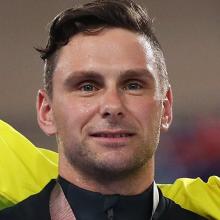 Eddie Dawkins
Olympian Eddie Dawkins is firmly focused on pedalling as fast as he can and upgrading his silver medal to a gold one at the Tokyo Games next year.

But the 30-year-old is already making tentative plans for life after cycling.

Instead of hugging the wheel of the rider in front on him and going round and round, Dawkins is flirting with the idea of tearing down the mountain side in a bobsleigh.

"I'm not sure what will happen after my cycling career but I always like to have some sort of physical challenge in my life," he said.

"Whether that is bobsledding or something else, I'm not too sure yet. I like going fast, though, and seeing what my body is capable of doing."

Dawkins is good friends with former New Zealand track cyclist Andy Williams, who is the captain of the New Zealand bobsleigh team.

Williams has been working on getting his old team-mate involved and told the Otago Daily Times last week Dawkins has "the pedigree to be a world-class bobsledder due to his size, explosive power and athletic ability".

The New Zealand bobsleigh team has set itself the ambitious goal of qualifying for the 2022 Winter Olympics. The idea of competing at both a summer and winter Olympics appeals to Dawkins.

"It would be cool.

"But I'm super focused on getting to Tokyo and having another crack at winning another Olympic medal. But it is definitely an [option].

"If I can help in some sort of way with a bit of profile in the meantime, then I'm more than happy to do that."

Dawkins has never raced in a bobsleigh but he has been briefed on what to expect.

Everyone other than the pilot spends most of the race with their head tucked between their knees.

"It must be like being on a roller-coaster with your eyes closed," he said.

Dawkins is based in Cambridge but he hails from Invercargill and is looking forward to returning home for the Oceania Track Cycling Championships later this month.

After that, there are a couple of world cup races before Christmas,

the UCI Track Cycling World Championships are in Berlin in late February and "the big show is in August".