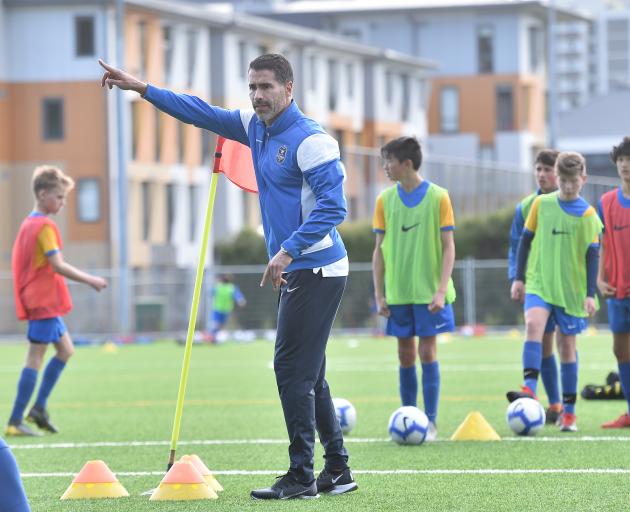 Angel, the former Aston Villa forward and Columbian international, is in Dunedin as the Fifa representative to open the new $4million artificial turf at Logan Park today.

Angel, who was brought up in the Columbian city of Medellin, said the new turf was a wonderful asset for the city.

"We used to play in the streets. That made you appreciate the good stuff when you got it. This [the new turf] is wonderful obviously for the new generation but not having much is good for you too," Angel said.

"I think I managed to get better skills but the biggest thing was I learnt how to survive. How to adapt to different circumstances and learn in different situations."

He said the game had changed a lot. Players were more educated and had more opportunities.

It was not better or worse than when he grew up, but the game offered so much more for players.

He lived in Columbia but also spent a lot of his time in Los Angeles, having played for a period in Major League Soccer in the United States.

The biggest thing about sport, he said, was about making you a better human being.

"You have to interact with different people. Being able to accept people were different and adapt [to] them ... make[s] you a better person."

Angel (44), who played 33 times for Columbia, said New Zealand was known for its rugby and cricket but there was plenty of room for football.

From what he had heard the sport was growing in New Zealand and Otago and that was pleasing to hear.

As for the chances of Columbia winning the World Cup, Angel said it would not be easy for his home country.

"It takes a lot of brilliance from players and you have to have development everywhere and not just with players. I think we have had improvements, but I think we have a long way to go to compete against the best."

Angel, along with Football South chief executive Chris Wright, would open the turf this afternoon just before the match between Southern United and Tasman United at the turf.