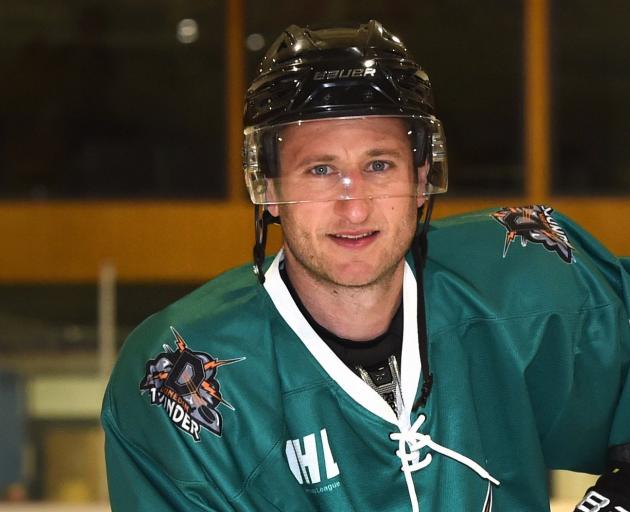 Matt Enright. PHOTO: ODT FILES
There will be no playoffs for the Thunder this year.

The Dunedin side dipped out of contention in the New Zealand Ice Hockey League with a pair of losses to the Botany Swarm in Auckland at the weekend.

A gutsy 3-2 overtime loss on Saturday was followed by a 6-4 defeat on Sunday.

In the opening game, there was a fractious beginning as two Swarm players quickly served time in the penalty box, but there was no scoring in the first period.

The clash remained scoreless until near the end of the second period when the Swarm scored twice in the space of five minutes, the first goal coming from Josh Whitston-Lee and the second from Kyle Jonsson.

The Thunder might have lost eight of its 14 games this season but it has plenty of resilience, and it came roaring back with two goals in the third period to send it to overtime.

The Thunder pulled goaltender Jonas Barakauskas with 35sec to play and used the extra man to good effect as Noah Gregory scored the game-tying goal, assisted by Darling and Dylan Devlin, with 16 seconds on the clock.

Just one minute 13 seconds into overtime, Michael Attwell scored the winning goal for the Swarm.

Sunday’s clash was more of a roller coaster.

The Swarm jumped to a 2-1 lead before Paris Heyd scored for the Thunder with two minutes left in the first period.

When Attwell scored just after the break to take the home team to 3-1, it looked grim for the Thunder, but it promptly replied with three unanswered goals to lead 4-3 heading into the final period.

That resurgence was nipped in the bid by the Swarm as it rattled in three goals in the final period.

The Thunder has the bye this weekend before ending its season with an away double-header against the West Auckland Admirals on September 21-22.

In the southern derby that opened the action on Saturday, the Wakatipu Wild thumped the Dunedin Thunder 8-0.

Gabrielle Mills led the Wild with a hat-trick of goals, while Kellye Nelson had two goals and four assists.

Kate Vernal and Beth Scott led the Dunedin women with two goals each, while captain Abbey Heale and Harriet Fuller each had two assists.

In its final game, the Thunder gave up four unanswered goals to the Canterbury Inferno before finishing strongly to lose 5-3. Heale, Fuller and Rina Watt scored for the home team.

Wakatipu backed up its opening win with a tense 4-3 win over the Canterbury Inferno, Nelson and Lova Holmqvist each having a goal and an assist.

The Wild could not complete a perfect weekend, losing 5-3 to the Steel.

Round two of the national women’s league is back in Dunedin on September 4-5.