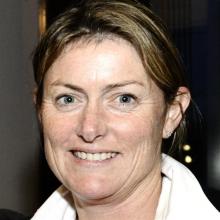 Nicki Paterson
Defending a title is never easy, although Physed A is not viewing it like that.

It is not that the team sees it as a good or bad thing. It just is not that relevant to today's premier netball final against the Southern Magpies.

A year ago it ended Southern's six-year title streak with a 45-42 win.

Since then new co-coaches Nicki Paterson and Jo Morrison have taken over from Alice Wells. There will be several players available this time around who did not feature last year.

Perhaps that might make it that bit easier to stay in the present.

"We haven't even talked about last year, or that we were defending champions.

It hasn't even come into the equation," Paterson said.

"We know it will be a really tough encounter.

Physed topped the table in round two and is coming off an 80-40 thrashing of St Hilda's in the semifinal.

Southern had a quality 68-46 win over the South Pac Titans to book its final spot.

The Magpies would pose a tough challenge to Phys Ed and Paterson felt they were strong across the court.

In Jennifer O'Connell it had size and she could slot in as either a shooter or defender.

The shooting duo of Hannah Riddle-Pelchen and Jess Allan was also performing well.

Zoey Flockton provides quality in the midcourt, while Tan-
eisha Fifita is a strong presence in the defensive circle.

Physed has plenty of quality of its own.

But it has shown it is more than capable of performing without them, too.

Emily Henderson and Ella Brown bring quality to the midcourt.

At either end, Sarah Boomer and Mara McCurdy partner their Steel counterparts well in the defensive and attacking circles respectively.

That being said, it would be a case of doing the simple things well.

"Just keep hold of the ball. Don't let them have the ball," Paterson said of Physed's tactics.

"If you score off your own centre pass and get a bit of turnover ball and really cherish it - and play smart.

"Don't put [up] any stupid cross-court passes, keep it short but keep the vision wide, those sorts of things.

"It's not rocket science."