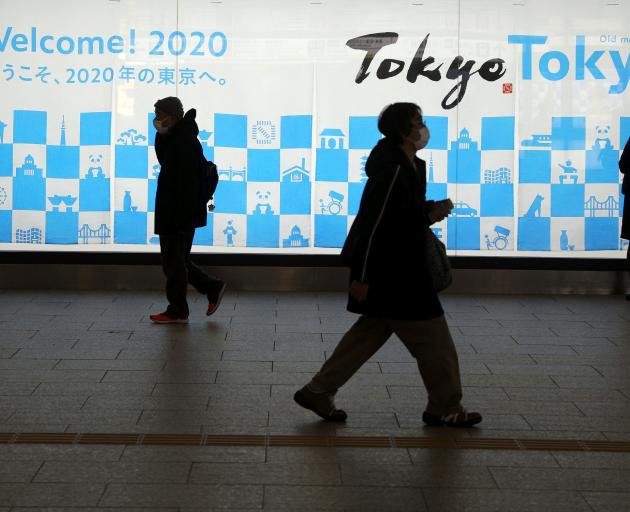 The Tokyo Olympics are scheduled for July 24-August 9 with the Paralympic Games due to be held from August 25-September 6. Photo: Reuters
The coronavirus pandemic must have reached its peak and be on the wane by the end of May otherwise the Tokyo Olympics cannot be staged on schedule, the head of the French Olympic Committee (CNOSF) says.

"My feeling is that if we're still in the crisis by the end of May I can't see how the Games can happen (on time)," Denis Masseglia told Reuters in a telephone interview.

"If we are beyond the peak and the situation is getting better questions will arise about who qualifies, but we will find the least worst solution."

"I trust the IOC and I'm waiting for more information although I'm not sure we'll get a lot more on Wednesday," he said.

The conference call will be preceded by talks between the IOC and the international sports federations on Tuesday.

The Tokyo Olympics are scheduled for July 24-August 9 with the Paralympic Games due to be held from August 25-September 6.

Last Thursday, Shigeru Ishiba, a ruling party heavyweight and a leading candidate to be Japan's next prime minister, said the country must brainstorm plans for dealing with a cancelled or postponed Tokyo Olympic Games, even if that was unlikely.

The coronavirus pandemic has infected almost 180,000 people and killed over 7000 worldwide, with the epicentre having switched from China to Europe.

Sports competitions have come to a halt in Europe as part of a global effort to contain the spread of the virus, hampering the preparations of athletes for the Olympics.

"At some points we're going to have to tell them (athletes) something (about the Games)," Masseglia said.

Masseglia, who has been head of the French Olympic Committee since 2009, said however that Japan had been tackling the spread of the virus perfectly.

"A week ago, I couldn't even imagine the situation we're in today (in Europe). When I came back on Saturday morning (from Japan) I came back confident, optimistic, telling myself the Japanese had handled the problem a little differently," he said.

"They are in extreme precaution, there are water-based gels everywhere. Everybody wears a mask, they work almost normally."

Japan has had 895 cases of coronavirus, while the total in Italy, Europe's worst-hit country, had reached 27,980 on Monday.

"If we are out of the crisis in a couple of months everybody will want to get back to normal, it will speed things up and we will be able to imagine something," Masseglia said.