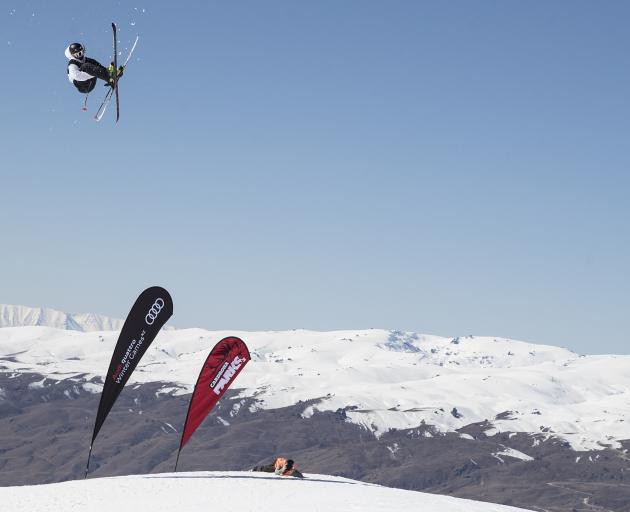 In front of a raucous home crowd cheering him on, Finn Bilous nailed some huge jumps in the final of the men’s freeski big air world cup at Cardrona yesterday, to claim his first ever world cup podium spot. Photo: Iain McGregor/AP
It was a day to remember for Wanaka freeskier Finn Bilous at the finals of the freeski big air world cup yesterday, as the teenager secured a world cup podium berth for the first time in his career in front of his friends and family at his home mountain of Cardrona.

Bilous skied superbly throughout the contest, combining some huge amplitude on his jumps with technical tricks and smooth landings, to ultimately finish in third place behind Swiss skier Andri Ragettli and Canada’s Evan McEachran.

Fellow Kiwi Jackson Wells struggled to land two of his jumps and limped away after his final run, finishing in 10th place.

Each competitor had three runs and their top two scores were combined to decide the final rankings.

Bilous led proceedings after the first run, stomping a huge switch triple rodeo 1440, well over 100ft, earning a 93.6, the highest score of the day.

From then on he simply had to land a solid second jump and he did so on his third run, sneaking in ahead of Norway’s Birk Ruud and on to the podium. It was a moment capped off by raucous cheers from the crowd, among them several Bilous supporters, including his parents, Pete and Emma, and older brother Hank.

Bilous described the finish as the "highest achievement" in his career to date.

"I’m ecstatic. It’s a perfect day up here at Cardrona and to be riding in front of all my friends and family on my home turf, it’s not something I get to do too often, so I’m very stoked I was able to come and do the tricks I wanted to and end up on the podium."

Having his family and friends watching  was "absolutely" the best part about having a home event such as this.

"They were all parked up on the side drinking beers and having a good time, so it was pretty sick to get to the bottom and hear them all cheering. It definitely makes you feel happy once you land on your feet.

"Most of our season is spent overseas competing and it’s very rare they get to see what we do, so it’s sick to come here and show them the world’s best, and to do well on top of that was the icing on the cake."

A proud Hank was one of the first to race down the mountain and congratulate Finn.

"Very stoked for little Finny; it’s been a long time coming. We always knew he had it in him and we’re pretty stoked to see it all come together today."

He hoped to see "more of this" in the future.

It was also a day of firsts in the women’s competition, as Canadian teenager Elena Gaskell claimed her first world cup title, landing a massive switch 1260 on her second run that got the crowd up on their feet.