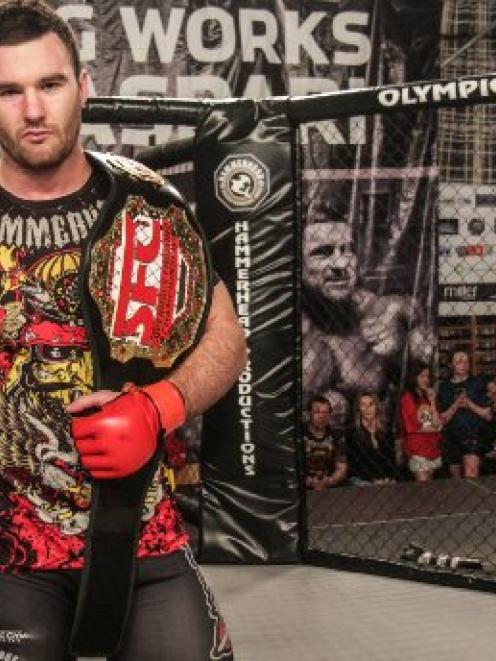 After a two-year hiatus, the Supremacy Fighting Championship returns to Christchurch tomorrow night.

Anderson will headline the main event when he defends his SFC light-heavyweight title against Richie Cooper, of Auckland.

Anderson (25) won the title at Dunedin's Hammerhead Productions show last year and he does not intend to relinquish it.

''I have trained right through Christmas and had about 14 weeks of preparation, so I'm definitely ready,'' Anderson said.

He did not know a lot about Cooper (five wins, two losses) but expected the Aucklander to come out ''hard and fast'' and bring ''heavy hands'' in the first round.

''I know he is pretty aggressive, but I am going to win whether it's by KO, submission or a decision,'' Anderson said.

While Anderson's trainer, Matt Toa, has been overseas for the past six weeks, Hammerhead team-mates have been putting the ''Arm Collector'' through his paces.

Anderson said Toa's absence was not ideal for preparation, but he had had some tough sparring partners, and various peers had been fine-tuning different areas of his game.

Anderson's record is seven wins and four losses. Five of his wins have come by way of arm-bar, and while he said it was not something he put extra work into, it was one of his favourite submissions.

''I do not base my game plan around a single attack, but I think it does make my opponents cautious and leaves them open for other aspects of my game,'' Anderson said.

An arm-bar is when a fighter straightens his opponent's arm out and applies pressure on the elbow joint by bending it backwards.

While he has a strong submission game, he is also a fierce puncher with a decent chin.

He lost an Australian title fight to Australian-based New Zealander Joe Muir in September before returning home and locking in his trademark move to win the SFC title just over a month later, against Pane Haraki.

Anderson said while Cooper may be a step down from past opponents, he was not taking him lightly.

He had always aspired to fighting on a Supremacy card, Anderson said.

Toa arrived back in Dunedin on Sunday and was certain Anderson was in fine fight condition.

He said Cooper had knockout power, but he was optimistic Anderson was the better all-round fighter.

While Toa was away Anderson was running the gym and that included helping prepare other fighters for future fights.

Toa said he had been in daily contact with Anderson and he had not only excelled as a fighter, but also as a trainer.