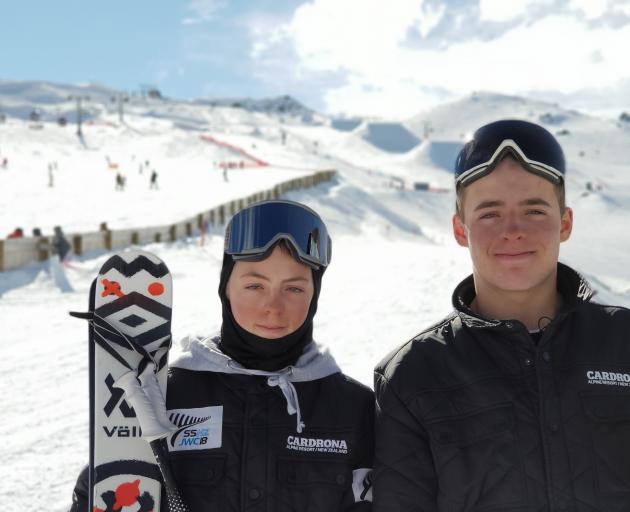 Today, Wanaka teens Maggie Little (17), Ben (16) and Luca (14) Harrington take part in the freeski slopestyle qualifiers at Cardrona against some of the world's best.

For Luca, it is the biggest event in his career to date, and he admits he is ''really excited'' to be taking part.

''To be part of the Winter Games, it's almost like a dream come true and to be able to compete with all the pros is really awesome.''

His older brother, Ben, is coming off the back of a strong northern hemisphere winter where he finished eighth overall in the Europa Cup, including a career-best first place finish in Slovenia.

That experience put him in good stead.

''It really helped because it gave me more confidence with competing. For me now, competing isn't as scary as it was before I went over there.''

He has set his sights on making the finals for both slopestyle and halfpipe, and admitted having such a competition in his backyard was ''really special''.

The same goes for Maggie Little.

The year 13 Mount Aspiring College pupil has a long affiliation with Cardrona, dating back to when she was a toddler.

''My parents worked there, so when I was growing up they'd always drag me along and I spent a lot of time in the ski kindy up there while they were working.''

Her knowledge of the slopes could be crucial, but she believes the best part about having home advantage is something completely different.

''Being able to have your mum cook you dinner at home.''

Maggie Little started competing in freeskiing when she was 14 and took part in last year's Winter Games against a field full of Olympians, which she said was ''cool to ski alongside people that I look up to''.

This year she is not putting too much pressure on herself, except to do the best she possibly can.

She plans to go pro once she finishes school at the end of the year, with her sights set on competing at the next Winter Olympics in Beijing in 2022.