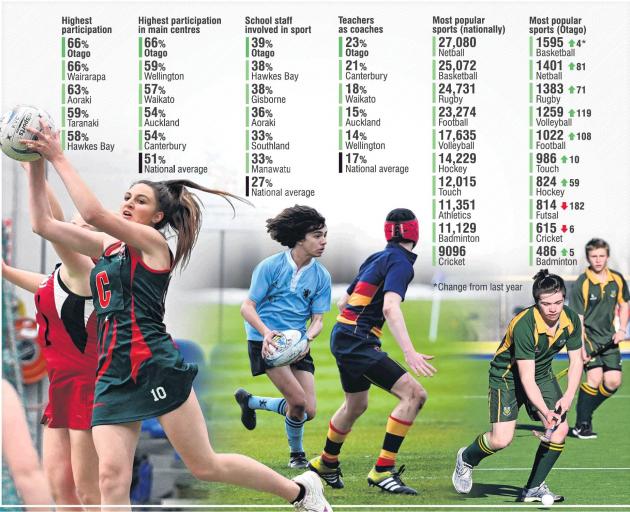 More girls are playing sport than boys in Otago — as a percentage — as the province increases its secondary school participation rates.

Otago is now tied with Wairarapa for most pupils playing sport at secondary school level.

They both sit on 66% of pupils at secondary school involved in sport, well above the national average of 51%.

Otago has increased by 1% from last year, an increase of just under 100 pupils.

There are 9843 pupils attending 23 schools across Otago.

Wakatipu High School falls into Southland’s area under the national associations and the North Otago schools are part of Aoraki.

"There are a lot of challenges out there around sport and nothing comes easy but these results are a real indication that we are doing some things right,’’ she said.

"Sport is considered important for a lot of schools."

She said the girls participation figures — at 66% — were outstanding considering that the national average for girls had slipped to 47%.

More boys played sport in Otago but there were more male pupils in Otago secondary schools.

The increase in girls’ could be put down to the four girls high schools in Dunedin all having active programmes and girls being given plenty of opportunities.

Girls at co-educational schools in Otago were also very active and in some cases were playing more sport than boys.

She said sports co-ordinators in schools were vital and did plenty of good work to keep sports running.

They went above and beyond in their roles and provided opportunities for pupils in many different sports.

Teacher-coaches had stayed the same in Otago at 23% of teachers coaching a team which was the best in the country.

Nationally, teacher-coaches had slipped by 1% every year for the past five years which equates to the loss of 700 coaches.

Paterson said teachers wanted to be involved as coaches as they valued the opportunity to work with pupils in a different way, away from the classroom.

Sports in Otago which had grown in numbers over the past few years were adventure racing, handball, petanque and mountain biking. The growth usually came from enthusiastic and well organised administrators.

But growth also presented issues concerning facilities. Handball was getting bigger and needed more court space while basketball was almost at capacity and played in gyms on Friday nights all around Dunedin.

She said delivering sport was many different things to different people but most wanted some form of competition and most wanted to win. It was about having fun and playing with your friends.

The most popular sport across the country was netball, followed by basketball, then rugby.

In Otago, basketball was the most popular, although it had increased only marginally while many of the other main sports had picked up good numbers.

Participation is defined as playing an active role in a sport which has a competition which runs for at least six weeks.