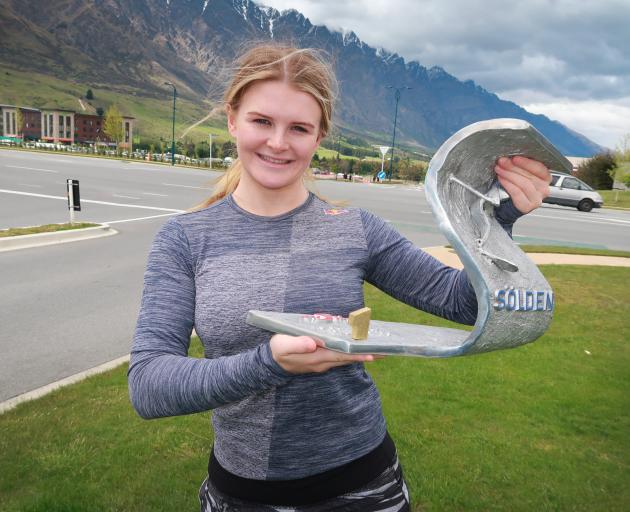 Alice Robinson back in Queenstown yesterday with her trophy. Photo: Philip Chandler
A leading New Zealand ski coach has revealed the secret of Alice Robinson's success.

NZ men's coach Nils Coberger, of Arrowtown, said that, unlike her rivals, the Queenstown ski race sensation tried to carve the top of every turn, rather than drift.

''We've always believed that it's faster - it's just physics.''

Coberger said he introduced the technique to the youngster when she came into his academy, at Queenstown's Coronet Peak, two years ago.

It was also bought into by her former coach Tim Cafe and current coaches Chris Knight and Jeff Fergus.

Coberger believes her rivals will have to adopt the technique, but that it will take them a year or two.

''It happens in all sport - [All Black] Sonny Bill Williams starts doing offloads, and now everyone does them.''

Coberger believes Alice's other strength is her incredible will to win.

''I've worked with a lot of elite athletes who have won multiple medals, and I have never worked with an athlete who is as mentally strong as Alice, who has her straightforward drive to win every race.

''She is the complete package, as an athlete.''

He believes she will have a fair crack at winning the GS globe this northern hemisphere season.

''She's only 17 and she's beaten the greatest GS and slalom skier of all time, Mikaela Shriffin, who's 24 and in her prime.

''It's just fantastic that someone from our part of the world can start to dominate a sport that is a truly global sport.''

Robinson, speaking back home in Queenstown yesterday, said she did not expect the victory.

''I was hoping for a top-five, but I just thought if I skied really well it could be a possibility.

''But I wasn't really expecting to pull it out on the day.

She praised her coaches and believes Shriffin welcomes the competition.

''She was pretty excited to watch me go down, definitely - bit of fresh competition [for her], yeah, it's exciting.''

Robinson's next World Cup race is in Killington, Vermont, in the United States, on November 30, on the eve of her 18th birthday.