All Blacks working on tackle technique 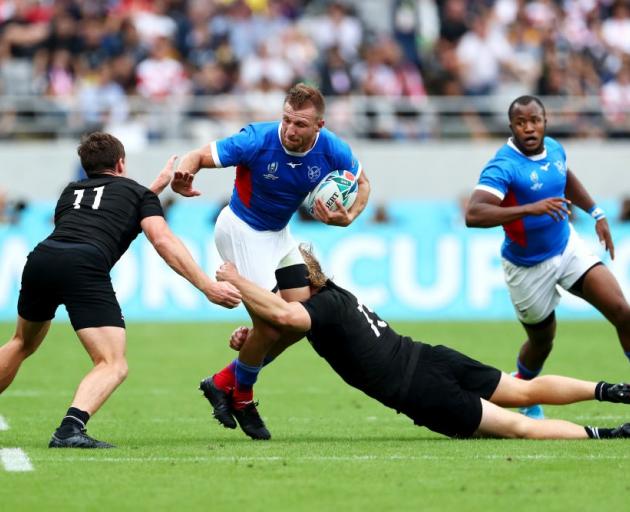 Namibia's Johan Tromp is tackled by Jack Goodhue and George Bridge during their Rugby World Cup match on Sunday. Photo: Getty Images
The All Blacks are putting in extra tackling practice at the World Cup.

They are attempting to avoid more yellow cards such as those shown to Nepo Laulala and Ofa Tu'ungafasi during the big win over Namibia.

Both props were sin-binned for high tackles on falling players; Laulala connecting with a head and Tu'ungafasi with a neck. They were the 16th and 17th yellow card at this tournament which is abiding by strict new guidelines which show little tolerance for even accidental high shots.

All Blacks coach Steve Hansen confirmed a day after the 71-9 victory, which took his team to the top of Pool B, that his side were spending extra time trying to work on ways to mitigate against an issue threatening to become the story of this World Cup. Fullback Beauden Barrett also revealed they were often training on the basis they had lost a player to a card.

It's significant, too, that big forwards are especially vulnerable to making high tackles due to an opponent's sudden change of direction, with Hansen somewhat ominously comparing their relative lack of agility with the sinking of the Titanic.

"Are we working on how to deal with a ball carrier falling over in the middle of a tackle? Yeah we are," Hansen said.

"There are certain things we have to make sure we do and we can't have an arm behind your shoulder because that looks like a swinging arm. I won't go into a lot of detail here because it's something we're working on and I'm sure everyone else is, but it's being able to recognise how quickly they are falling and how to pull out of the tackle or how to do the tackle differently."

Asked if a card was likely to have a big bearing on the result of a knockout match, Hansen said: "I'd say so, but again we all know what the guidelines are.

Hansen, who put forward suggestions to World Rugby before the World Cup in accordance with the ruling body's request for feedback, said he hoped his side wouldn't have to make any tackles in the final stages of the Namibia match at Tokyo Stadium due to a fear of another card and said bigger forwards in particular were extra vulnerable.

"If you've got good tackle technique, and we're trying to tackle under the ball, you're going to be okay. However, yesterday we saw two exceptions to that and that was two guys falling over.

"Our game is about intimidation. Some people may not want to hear that but it's a fact. It's about me dominating you and you do that through intimidating legally, not illegally. It's a physical game, it always has been and always will be. It's one of the components of the game that players, coaches and fans like about it.

"It's a consequence of the fact a few people have been very seriously injured in tackles and in some cases actually passed away. So you're not leading if you're not looking at that and World Rugby are the leaders of the game, they've looked at it and decided this is the way to go."

Hansen said Laulala and Tu'ungafasi were disappointed at having to leave the field and didn't want to be known as dirty players, adding: "Their agility is not the same as the bloke who was sitting here before [Beauden Barrett]. He can change direction on a six pence. Some of those bigger boys take a bit of time. It's like a big boat versus a little boat, isn't it. The Titanic didn't move quick enough and sunk."

Barrett added: "One thing we do probably have to train is the way we do tackle. It's something that could hurt us going forward in the tournament and already has. We're mindful of that and it's something we're working really hard on."

Hansen added that he didn't want to elaborate on his halftime rev-up revealed to the media after the match by hooker Dane Coles, saying his side's mental approach wasn't quite right. Hansen said it was unlikely to be a problem in the final pool game against Italy at Toyota City on Saturday.

Hansen added of the difficulty in getting to an appropriately heightened state regardless of the opposition: "I've only met or been associated with one player who could do it week in, week out, regardless of who we were playing and that was Richie McCaw. He never really had a bad game. He never had an off day. But in the end, it's probably one of the reasons why he retired because it takes a lot of effort; emotional effort and mental effort."