Carter doing what he loves

Dan Carter was the man of the moment the last time the All Blacks ventured to the World Cup. Now his life and times are the subject of a new film. The  leading test points scorer talks about Dan Carter: A Perfect 10 with ODT sports editor Steve Hepburn.

Dan Carter was a reluctant star of the screen. He admits a film about his career did not initially get his wheels turning.

"I just got approached by Pitch Productions. I had done a little bit of work with them before . . .They asked if I would do a film about my life, my career and that,’’ he said.

"At first I thought no, no way - I would not want to have a film about me. I was a little bit embarrassed about it. But then I thought maybe it would be good to have something to look at, something to show my kids about my career.

"Often when you’re playing you don’t get the chance to look back on your career. Now that I have retired it is good to go back and have a look at what you have achieved, and reflect on some of the ups and lows and what happened.’’ 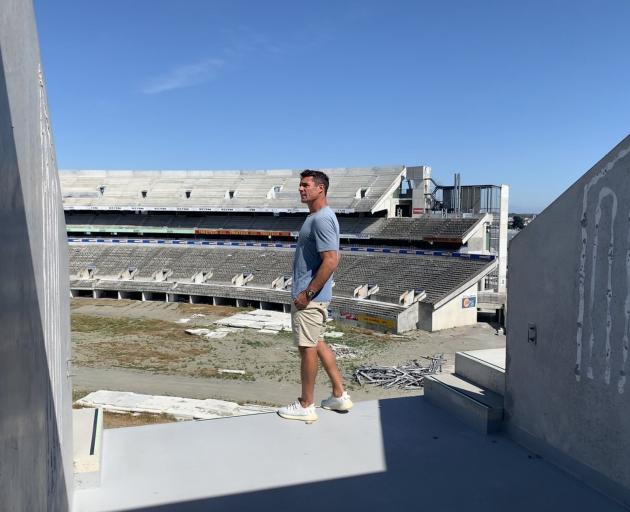 Dan Carter at Christchurch’s AMI stadium after the city’s earthquakes. PHOTO: SUPPLIED
As it turned out, movie-making wasn’t such a bad experience.

"I really enjoyed it. It was good - it paints a picture that not everything was smooth sailing throughout my career - [there were] a lot of injuries and setbacks.’’

Carter says the film explores what a player does and how much a player goes through to get on the field.

"I was watching an All Black game once. I was injured and up in the corporate box. The way people were talking, they just think we turn up in the weekend and play.

"They don’t understand the preparation and time and effort we go through on a daily basis. As soon as the game is finished, we are into the ice baths, on the bike. Sunday is a big day, we build-up to the highest level in the weekend, to play the game that we love.’’

Carter played in more tests than he sat out. He appeared in 112 tests and scored 1598 points.

He has played all over the world but still retains a bit of Southbridge in him. He grew up in the central Canterbury town and it features in the film.

"That is what I love going back to. That is where the dream of playing for the All Blacks started. People see a lot of what I achieved throughout my career. They were shooting some content in France - all the fashion shows and the bright lights in Japan. But that was balanced well with the time in Southbridge.

"In a town like Southbridge, you can be free and be a kid, do things I love, throw the ball around. All the skills people saw started in the back yard. Just that pure enjoyment of playing and doing what I love.’’ 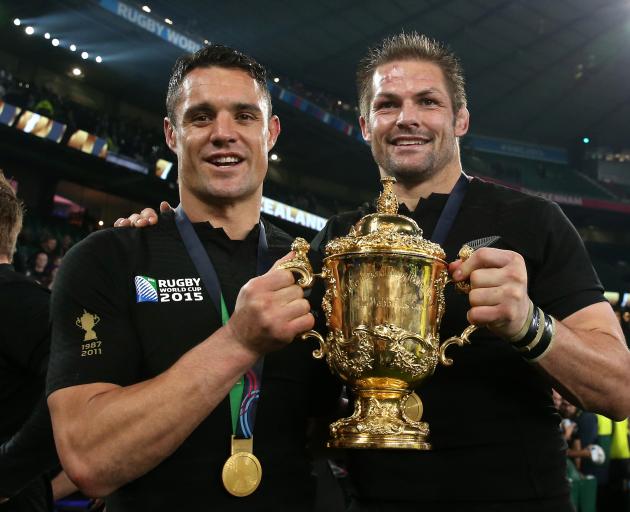 All Blacks Dan Carter (left) and Richie McCaw with the Webb Ellis Cup in 2015. Photo: Getty Images
Carter finished internationally at the top of the mountain, winning the World Cup with the All Blacks in 2015.

Four years earlier there was despair, as injury ruled him out of the World Cup.

"That was really tough. You put on a brave face but behind closed doors I was in a dark place. Things happen for a reason. I had that Achilles injury in 2009 and that was tough to take but that was my body telling me I needed a break.

"Looking back at it now, to be able to finish the way I did, that was OK. That is why that happened at that time, to make me work even harder and make it worthwhile.’’

Carter is still not quite finished playing. He turned out for Japanese club Kobe last season and the side won the league.

He had a neck operation a few months ago and is hoping to get back into training next month as he eyes one more stint in Japan.

After that, who knows. The playing days will be hard to close.

"The reason I play rugby is the enjoyment - still love playing, just like a 5-6 year old. If you lose that then you should stop playing.’’