Every reason ABs will win, and plenty they won't 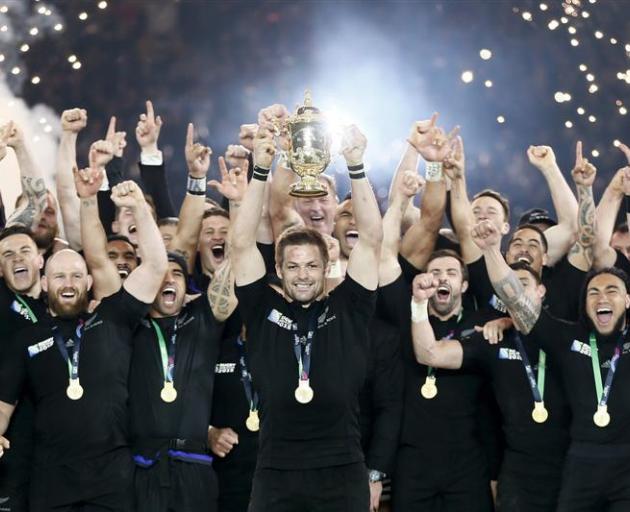 Will the All Blacks raise the Cup yet again? Photo: Reuters
The All Blacks start the path to a hat trick of World Cups with the match against the Springboks tomorrow night. So can they do it? Or is it a wall too high to climb? Rugby writer Steve Hepburn looks at the upside and the downside.

Why the All Blacks will win

•The All Blacks have more world-class players than any of the other 19 sides. It really is that simple. The best players win the trophies. Other sides do have plenty of good players. Wales has some good backs and solid forwards. South Africa has come back from the lows of a couple of years ago. But the men in black have more top players than anyone else.

•It is a tired old cliche - a mix of youth and experience. But it really does mean something at World Cups. The All Blacks have the wise heads and that will be a useful tool to have when the pressure comes on. Not just Kieran Read and Sam Whitelock. Guys such as Beauden Barrett and Aaron Smith are well travelled now. Throw in youngsters such as George Bridge and Ardie Savea and it is a formidable team.

•To win it all, a side has to play three very tough games in three weeks. Play well for more than 240 minutes. The All Blacks have the tools and the arsenal to go to the table three times and deliver their top game.

•The team is full of quality and cool heads. But it also has the vital ingredient to turn games - X-factor. Barrett, any of the outside backs, Sonny Bill Williams. The players have the ability to create something out of nothing. That may well be the difference in close games

Why the All Blacks will not win

•The past couple of years has been all about rush defence and defensive sides getting up and shutting down the attack. It has led to plenty of chip kicks and cross kicks.

The All Blacks have been working on a master plan to overcome the rush defence. Good luck, lads. No-one else seems to have conquered it.

•You can have all the talent and plans in the world but, when the heavens open up, it can be a lottery. Japan can be hot but it also knows how to rain. And when it does the game will be hard to pick.

•Experience is a funny thing. If it is all its cracked up to be, then put in a front row of Andy Dalton, Tony Woodcock and Carl Hayman. Playing ability matters more. It is a fine line between wisdom being equalled by the quickness of youth. The All Blacks could be too old.

•Sometimes - actually, much of the time - it is simply not your day. The rub of the green does not go your way, the opposition turns up and plays an absolute blinder. The All Blacks won the past two World Cups when things went their way. Have they just used up their cup of good fortune?